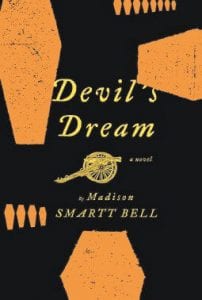 In “Devil’s Dream,” Madison Smartt Bell has chosen as his subject a Confederate general and slave trader who would go on to become one of the leaders of the early Ku Klux Klan.

By breaking up the story’s chronological order and injecting it with a dash of magical realism, Bell creates a multifaceted, largely sympathetic portrait of Nathan Bedford Forrest — one of the Civil War’s most distinguished and reviled generals.

Bell begins his story, however, with a black man, hungry, alone in the woods and reduced to hunting deer with a crude spear. The man, Henri, does not remain in this primitive state long, though. He is quickly happened upon by Forrest and his soldiers and conscripted into the Confederate army.

Henri, who appears to be entirely fictional, accompanies Forrest through much of the book, serving as a kind of spirit foil for the general who rose from hardscrabble roots and the rank of private. Over the course of a seemingly endless series of battles, having horse after horse shot out from under him, Forrest grows to be seemingly invincible.

The only time the general ever appears afraid is in when he seduces, or more accurately, is seduced by the slave woman who would bear him two children. His only other weakness is gambling, but that might also account for his success in battle, where he repeatedly plunges in against over- whelming odds, inspiring fear and respect among his foes.

Forrest stirs the same kind of feeling among his slaves; he offers them freedom if they follow him into battle. A good number do, including his out-of-wedlock son, Matthew.

The drama that plays between Forrest’s two sons — one white, the other mixed — provides some insight into the contradictions in Forrest’s own heart. The two half brothers join the war as rivals but in the end achieve a mutual respect and uneasy peace.

To Bell’s credit, “Devil’s Dream” is a gripping read, even with all the jumping back and forth in time. Only toward the end is it clear that Henri was killed earlier in the war and has followed Forrest through much of the book as a spirit presence.

To clear up any confusion, Bell provides a timeline for Forrest’s life at the end of the book. Only there does Bell mention that Forrest went on to help found the Klan. But Forrest was also apparently involved — post Klan — in efforts to unite blacks and whites, and late in life he apparently becomes a practicing Christian.

The sincerity of such late-life conversions may be questionable but there is little question that Forrest’s maddening contradictions make for a compelling story.