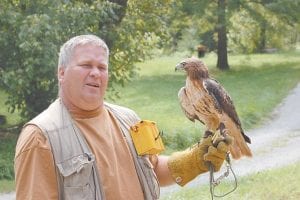 Whitaker’s designation means he is the only resident in the county who can legally trap hawks, train them, and use them for hunting game.

Whitaker’s love of raptors began as a young boy when he read "My Side of the Mountain" by Jean Craighead George. The book left Whitaker wanting to befriend a hawk the same way George’s character, a runaway named Sam Gribley, did with Frightful, his peregrine falcon.

After discovering he wasn’t then old enough to get a falconer’s license (the age limit is now 14 for an apprentice), Whitaker eventually lost interest in the idea. Years later, he decided to pursue his dream but didn’t realize it would be such a challenge to get another licensed falconer to agree to train him.

In 2003, a falconer from Somerset agreed to sponsor Whitaker, now 48. Whitaker then successfully completed a test required by the Kentucky Department of Fish and Wildlife before someone is given a permit to capture and keep a hawk. He is now willing to train others who may want to get involved with the sport.

"I had so much trouble getting someone to help me with it that I thought I could bring it to this area and could help others around here become a falconer," said Whitaker.

The term falconry is used to describe the use of all trained birds of prey to hunt and catch game. As one who flies a hawk, Whitaker is an "austringer" and is one of 60 federally-permitted falconers in Kentucky and one of fewer than 5,000 in the U.S. He has trapped and trained 10 hawks. He is permitted to have three raptors, or birds of prey, in his possession, but opts to train only one at a time.

Whitaker trapped the Redtailed Hawk he has now behind the Whitesburg Walmart two years ago. He named the bird Deuce because it took him two attempts to trap him, using a wire cage with a hamster in it as a lure.

Whitaker said he spends time with Deuce each day to make sure the bird remains familiar with him, but said it wouldn’t take much time for Deuce, who was less than a year old when he was trapped, to become wild again.

"Even if I kept this bird for 20 years he would never be my pet," said Whitaker. "He only sticks around for the food. These animals are strictly in survivor mode all the time. They’ll never ever become pets or anything lik e th at."

Whitaker said four of five hawks don’t live to be a year old.

"They are sort of shoved out of the nest, sink or swim," he said. "When you see one that has survived several years and starts breeding, they are a real survivor."

Whitaker said he has been feeding Deuce all summer, but will soon begin preparing him for hunting season.

"Through the summer months, you aren’t allowed to hunt with him," said Whitaker. "Right now he is really fat. I’ll start cutting his weight down a little at a time ."

Whitaker weighs Deuce on a scale and said a weight of 925 grams is perfect for hunting. If the bird weighs more than that he is too full and will land in a tree and refuse come down, said Whitaker. If he weighs less than that, he is too weak to hunt.

"I catch myself rooting for the squirrel because once he finds them he is going to get them," said Whitaker.

Whitaker said he waits until most of the leaves have fallen from trees in the middle of November before he takes Deuce hunting so he won’t lose the hawk in all of the foliage.

"I had my best season with him last year," he said.

Whitaker said after hunting season he will let Deuce go and will trap and train a new hawk when permitted.

Whitaker has been invited by Homer Pigman of the Kentucky Department of Fish and Wildlife to take Deuce around to schools in the county as part of a wildlife education program.

Whitaker said he would also like to obtain a permit to rehabilitate hawks that have been shot or hit by cars.

According to the Virginia Falconers’ Association, the origin of the sport of falconry is unknown but has been popular in the Far East since the year 244 A.D.