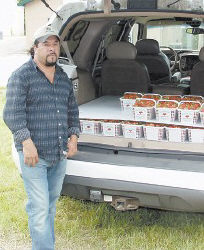 Antonio Granados, above, has spent the last week driving two hours every day to Ermine from Rogersville, Tenn., to sell strawberries

Antonio Granados has spent the last week driving two hours every day from Rogersville, Tenn., to spend a whole day selling fresh strawberries out of a white van he parks near the old Chevron gas station at Ermine. He arrives in Letcher County around 11 a.m. and then heads back to Tennessee around 5 p.m. The next day he packs more strawberries in his van and heads back to Letcher County for another full day of selling strawberries.

The Sweet Charlie and Chandler strawberries, which Granados sells for $10 a gallon, are grown on the Davidson Farm in Rogersville, Tenn.

Billy Davidson, owner of the Davidson Farm, said the flavor of the strawberries that he grows is “off the chart.”

This is the third year Granado has driven to Letcher County to sell the red fruit, which he says is a popular item here.

“A lot of people buy them,” said Granados. “I don’t know why, but they like them.” 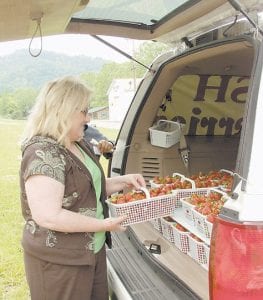 Denise Logan of Whitesburg, left, picked out a fresh basket of strawberries from the back of a van Granados drove to Ermine. It was her second purchase in three days.

On Memorial Day Granados sold 20 gallons of strawberries during the first two hours he was at Ermine.

Denise Logan, of Whitesburg, said she and her family enjoyed eating the strawberries so much that she came back to buy more.

“I bought some Saturday and they lasted until today so I had to buy more. They were really good,” said Logan on Monday.

Granados said this will be the last week he will be in Letcher County selling strawberries.

“There aren’t many left because it has been a bad year for strawberries,” said Granados.