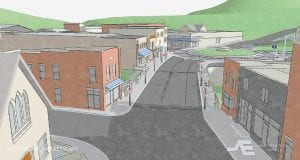 The Whitesburg Streetscape project as seen looking east from near the Methodist Church on Main Street in this rendering by Summit Engineering.

The Letcher County Tourism and Convention Commission has proposed putting a roundabout in downtown Whitesburg that would hopefully help fix a traffic problem near the old Hoover’s Department Store building.

In addition to traffic coming in several different directions, the entrance to the free city parking lot is also located at the intersection. It is now unclear which motorist has the right of way if a car is traveling down College Drive and another car is coming from the loop of the Whitesburg Bypass.

“ The area where the three streets meet is confusing to drivers and is potentially dangerous, although we have had no experience with wrecks,” said Whitesburg Mayor James W. Craft. “It certainly would eliminate all of that.”

With the proposed roundabout, traffic would flow in one direction around the circle and motorists entering the circle must yield to cars already there.

Water fountains would be installed around the roundabout and a statue would be placed in the grassy center.

“I think it is absolutely gorgeous,” said Craft. “What I have longed for since I have been in office is to have a water fountain in Whitesburg.”

The roundabout is just one of many upgrades proposed in the streetscape project proposed for Whitesburg.

Dr. David Narramore, chairman of the tourism committee, said the multi-million dollar project would be implemented in phases as funding becomes available from various sources.

“The master plan that has been developed for the historic district in downtown will allow for an orderly progression of revitalization while preventing waste and duplication of construction,” said Narramore. “The end result will be a final product that is flawless, but that does not look piecemealed.”

The first phase, which Narramore said could begin immediately, calls for the installation of public art, window boxes and shutters on the riverside view of a building owned by Dr. Pellegrini at 304 Main Street. The plan includes fabrication of a concrete planter to cover a retaining wall there.

Two concrete planter boxes would be placed at the each end of Main Street bridge which spans the North Fork of the Kentucky River, also known as the Seaman First Class Lloyd Brown Bridge.

Narramore said the tourism commission will also attempt to obtain permission from the Kentucky Department of Transportation and the City of Whitesburg to clear space for a picnic area overlooking Mountain Heritage Festival Village.

The tourism commission will develop a uniform awning program to be used during the streetscape project and will encourage downtown business owners to choose from one of four different recommended awnings to place on the front of buildings. A proposed tax incentive would help offset costs.

The first phase of the project also calls for Mountain Heritage Festival signs to be placed along the Whitesburg Bypass, and for Whitesburg artist Doug Adams to paint a mural on the sides of the Cowan Street apartments which are housed in a building formerly occupied by WIFX radio.

Phase two involves the design and construction of an amphitheatre at the Mountain Heritage Festival Village. A pavilion would extend from the main stage with restrooms.

Businesses which touch Broadway Street behind the Letcher County Courthouse will be encouraged to paint the backs of their buildings an off- white color and to install art on the back sides. Narramore said this is the first sight motorists see when entering downtown from the KY 15 bypass ramp.

The roundabout, water feature and sculpture have been placed in phase three in addition to re-routing all overhead utilities to underground. The construction and re-routing of sidewalks is also in phase three.

With funding from a mini grant provided by the Center for Rural Development, Summit Engineering created computerized renderings of what downtown Whitesburg could look like if all of the recommendations were applied.

“(Summit) has done an awesome job of breathing life and energy into the revitalization of historic downtown Whitesburg (and) restoring hope for its future,” said Narramore.

Both the City of Whitesburg and Letcher Fiscal Court voted unanimously last week to support a grant application by the tourism commission to enter into the planning stage of the project.

“ The support from Letcher County Judge/ Executive Jim Ward and all the members of the Letcher Fiscal Court, Mayor James W. Craft and the members of the City Council of Whitesburg has been overwhelming,” said Narramore. “ Tourism commission members Donna Boggs, Creda Isaacs, Debbie Hogg, Richard Brown and the old General David ‘Butch’ Chaltas have been extremely supportive of this project throughout the grant process.”

“Whitesburg is already on the path of becoming a place for people to visit,” said Craft. “The more beautiful it is, the more it becomes a better place to visit.”