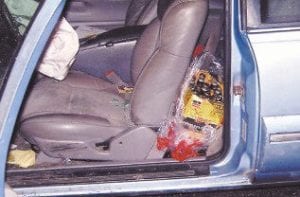 TRAGEDY AVOIDED – James Riley of Neon was charged with drunk driving after crashing this car, with beer shown in the back seat, near a tent occupied by striking nurses.

A labor dispute between registered nurses and Appalachian Regional Healthcare nearly turned into a tragedy last week when a drunken driver just missed crashing his car into a tent occupied by pickets and their families.

Whitesburg Police Officer Mark Sexton said at least seven registered nurses and various family members were sitting inside the tent at 8:30 p.m. last Wednesday (December 12) when a car driven by 48-year-old James Riley of Jenkins left the Whitesburg bypass and crashed into three vehicles parked near the tent. Luckily, no one was injured.

Sexton said Riley was traveling south on KY 15 when his Mercury Cougar veered off the roadway and hit a parked Ford Taurus, taking off its front wheel. He said Riley then overcorrected and hit the back of an Oldsmobile Cutlass, pushing it into a Ford Ranger. The Oldsmobile and Riley’s Mercury came to a stop in the grassy area beside the road while facing the opposite direction in which they had been headed. 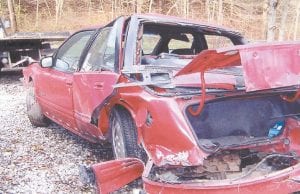 HEAVY DAMAGE, NO INJURIES – Patty Fields, a nurse on strike against ARH, was sitting with fellow pickets inside a tent beside the Whitesburg bypass when her car (pictured above) was hit by a car (shown below) driven by James Riley of Neon. Riley faces drunken driving charges as a result of the crash.

Sexton said four cars had been parked in a line before the wreck, but that somehow Riley did not hit a Chevrolet Suburban parked between the Taurus and the Cutlass.

Sexton said no one was injured, but that it could have been a different story if the vehicles had not been parked in front of the tent.

“If he hadn’t hit that car, there’s a possibility he could have run into the tent,” said Sexton.

The people in the tent told Sexton they heard the first collision, but that everything was a blur after that.

Sexton said the vehicles were parked far off of the shoulder of the road to keep them from being in the way of vehicles driving on KY 15.

“It would have taken someone impaired to hit those vehicles,” said Sexton.

Sexton said Riley had a blood alcohol level of .113, with .08 being the legal limit. Riley was charged with driving under the influence of alcohol.

Sexton said several things could have played a role in the cause of the wreck. He said the road was wet because of the rainy weather, and that Riley had been drinking alcohol before stopping at a nearby Wendy’s to buy food. 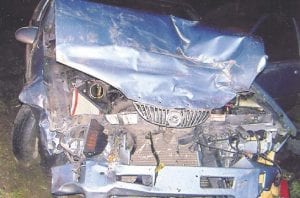 “There was Frosty all over the car. Behind his seat was a case of beer and six or seven were empty,” said Sexton.

Sexton said Riley had slurred speech and was staggering after the wreck.

“He said he was coming from Lexington (from) seeing his wife who had cancer,” said Sexton, who is continuing to investigate the case.

Meanwhile, the nurses’ strike against ARH at Whitesburg and eight other hospitals this week grew to more than 2-1/2 months long.

As late as last Thursday, both sides were still mulling over a proposal by Kentucky Gov. Steve Beshear and West Virginia Gov. Joe Manchin that calls for the nurses to return to work for 90 days while contract talks continue.

In a related matter, religious leaders from nine states have asked the nurses and ARH to resolve their contract dispute for the sake of their patients. 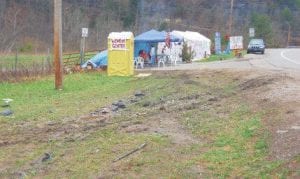 CLOSE CALL – The muddy tires tracks and stray car parts shown in the foreground of this photo show how near the wreck occurred to tents being used as picket shacks by striking nurses. (Photo by Chris Anderson)

“The saddest outcome of this prolonged dispute is that our communities in Appalachia and the quality of our health care will suffer the greatest if this dispute is not settled soon,” said the Rev. John Rausch, director of the Catholic Committee on Appalachia.

Rausch and more than 75 other leaders submitted a letter to ARH President and CEO Jerry Haynes and members of the Kentucky and West Virginia nurses associations. The letter supports continuous bargaining, but scolds ARH for permanently replacing about 150 of the nurses on strike.

“From a moral and ethical perspective, the permanent replacement of striking nurses at Appalachian Regional Healthcare must stop, and permanently replaced workers should be reinstated,” the letter says.

The statement represents views of religious leaders from several groups, including the Central Conference of American Rabbis, the Episcopal Church, the Evangelical Lutheran Church in America, the Roman Catholic Church, the United Church of Christ and the United Methodist Church.

Rausch met with 15 nurses on strike from the ARH hospital in Hazard before speaking to reporters last week. A similar gathering was held in Charleston, W.Va., where the Rev. Dennis Sparks called on the ARH Board of Trustees to get involved with negotiations.

“Reaching a fair settlement quickly is not only important to the nurses, it is critical to ARH’s financial viability, and the future of heath care in Appalachian communities,” he said in a statement.

Rausch said members of Judeo-Christian faiths were concerned because they believed the lives of patients were at stake.

“Health care is a human right. It’s not a commodity,” Rausch said. “In the New Testament, there’s healing, there’s healing on practically every page. … Strikes are a horrible breakdown in human cooperation.”

He said that while ARH can legally replace the nurses on strike, it’s morally wrong.

But those on the picket line say their main purpose for striking is the well-being of their patients. They say that staffing levels are spread too thin and mandatory overtime has become the norm.

Still, several nurses complained that even if their patients’ medical needs were met, their emotional needs were neglected. Sometimes, they said, the patients simply need to talk – and nurses were too busy to stop and lend an ear.

“The patients deserve so much better than what they were given,” said Sherry Eversole, a recent nursing graduate who was hired by ARH in July. “I didn’t have time to do for those people what they deserve.”

“I want to treat my patients as if they were my family. When I go home, I want to feel good about what I’ve done,” she said.