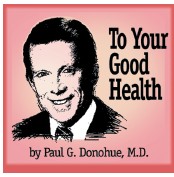 DEAR DR. DONOHUE: Six years ago, my father died of a stroke. My mother tried to rouse him from bed, but he responded with confusion and was unable to speak. She called for an ambulance. He was in the hospital only four hours before he died. The doctor said he would have lived if he had gotten treatment sooner. My mother has felt guilty about this ever since.

She lives with us now. I don’t want to miss a stroke if she has one. How do you recognize one, and what should be done right away in an emergency? — T.B.

ANSWER: Nearly 900,000 strokes occur yearly in the United States, and of those victims, 200,000 die. Many of the survivors are left with great disabilities. Strokes come in two types: One is an ischemic (is-KEY-mick) stroke, and the other is a hemorrhagic stroke. “Ischemic” means “deprived of blood.” It’s the more common kind of stroke, accounting for 80 percent of all strokes. The flow of blood to part of the brain is blocked by a clot in an artery. It’s the brain’s equivalent of a heart attack. The other 20 percent comes from bleeding in the brain, a hemorrhagic stroke.

Signs of either kind of stroke include slurred speech, sudden confusion, numbness of the face, arm or leg, trouble seeing, dizziness and severe headache. Many advocate testing the person to decide if a stroke has occurred. Asking the affected person to stick out his or her tongue and seeing if it deviates to the side is one of those tests. Don’t waste time doing tests. Immediately call 911.

I’m limiting what I say about treatment to strokes resulting from the obstruction of blood flow. Brain cells begin to die within minutes. However, there’s a three-hour window during which clot-dissolving medicines can be given. They almost always lead to a full recovery of function. Now the window has been opened wider, to 4 1/2 hours. That doesn’t detract from the important message that the earlier the treatment, the better the result.

The booklet on strokes tells their signs and their treatments. Readers can obtain a copy by writing: Dr. Donohue — No. 902W, Box 536475, Orlando, FL 32853- 6475. Enclose a check or money order (no cash) for $4.75 with the recipient’s printed name and address. Please allow two weeks for delivery.

DEAR DR. DONOHUE: My husband is very nearsighted and has to wear thick glasses. I’m not. I don’t wear glasses at age 50. We have four children. What are their chances of having to wear glasses? — E.P.

ANSWER: Nearsightedness (myopia) indicates that the eyes can see things that are near. Nearsighted eyes don’t see distant objects clearly. It’s a common eye condition, and genetic involvement in it is high.

If neither parent is affected, the children have an 8 percent chance of developing nearsightedness. Factors other than genes have to be at work. (Don’t believe these percentages with unquestioning acceptance. I don’t.)