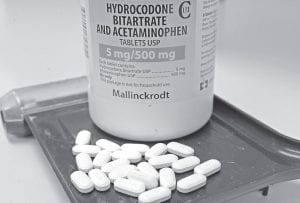 NEW RULES COMING — The Food and Drug Administration has recommended new restrictions on prescription medicines containing hydrocodone, the highly addictive painkiller that has grown into the most widely prescribed drug in the U.S. (AP Photo)

“The Food and Drug Administration has recommended tighter controls on how doctors prescribe the most commonly used narcotic painkillers, changes that are expected to take place as early as next year,” Barry Meier reports for The New York Times. “Drugs at issue contain a combination of hydrocodone and an over-the-counter painkiller like acetaminophen or aspirin and are sold either as generics or under brand names like Vicodin or Lortab.”

“Doctors use the medications to treat pain from injuries, arthritis, dental extractions and other problems,” Meier writes. “The change would reduce the number of refills patients could get before going back to see their doctor. Patients would also be required to take a prescription to a pharmacy, rather than have a doctor call it in. The new regulations would reduce by half, to 90 days, the supply of the drug a patient could obtain without a new prescription.”

The agency said it approved the extended-release pill Zohydro ER for patients with pain that requires “daily, around-theclock, long-term treatment” that cannot be treated with other drugs.

The new drug from Zogenix is the first pure hydrocodone drug approved in the U.S.

The approval came as a surprise since the agency’s own panel of outside advisers gave the drug an overwhelmingly negative review last year. The panel of pain specialists voted 11-2, with one abstention, against approving the drug, questioning the need for a new form of one of most widely-abused prescription drugs in U.S.

Zohydro’s approval was quickly criticized by patient safety advocates who had urged the FDA to reject the drug at the public panel last December.

“We’re just going to kill more kids and then the FDA is going to come back and say, ‘oh, we made a mistake,’” said Avi Israel of Buffalo, N.Y. Israel’s son Michael committed suicide in 2011 while struggling with painkiller addiction. Israel is the founder of a group called, Save the Michaels of the World, which aims to combat painkiller abuse in young people.

In 2011, U.S. doctors wrote more than 131 million prescriptions for hydrocodone, making it the most prescribed drug in the country, according to government figures. Hydrocodone also consistently ranks among most-abused medicines in the U.S., according to the Drug Enforcement Administration.

The drug belongs to a family of medicines known as opiates or opioids because they are chemically similar to opium. Others include morphine, heroin, oxycodone, codeine and methadone.

The news was also blasted by lawmakers on Capitol Hill who have been trying to rein in prescription drug abuse in their home states.

U.S. Rep. Hal Rogers of Kentucky’s 5th District “said that top FDA officials had recently assured him they would only approve new opioids like Zohydro if they were marketed in formulations intended to deter abuse,” Meier and Eric Lipton reported for The Times. “OxyContin is now formulated that way, but Zohydro, which is contains hydrocodone without acetaminophen, is not. Its producer, Zogenix, says it will closely monitor use of the drug.” Rogers told the Times, “It is like the original OxyContin, so that is real problematical.”

Rep. Bill Keating, DMass., also said the FDA should have required the drug to contain anti-abuse design features that would make it harder for users to crush the pills and snort or inject them.

“FDA not only approves this dangerous drug, but does so without requiring any abuse-deterrent features. This is outrageous,” Keating said in a statement. “Abuse-deterrent technologies should not be the anomaly, they must be the norm.”

The drugs currently available mix hydrocodone with non-addictive pain relievers like aspirin and acetaminophen. For decades these drugs have been subject to less rigorous prescribing limits than other prescription painkillers like oxycodone.

The DEA had first asked the agency to reclassify the drug a decade ago, and lawmakers and safety advocates had increased their pressure on the agency in recent years.

The FDA said the newlyapproved Zohydro would be regulated under the schedule II classification.

The agency is also requiring the drug’s manufacturer to conduct studies of Zohydro’s potential misuse and abuse when used longer than 12 weeks.