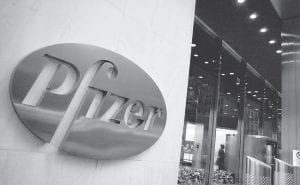 The world headquarters of the Pfizer drug company is located in New York City. (AP photo)

The Food and Drug Administration said it has received reports of 37 suicides and more than 400 of suicidal behavior in connection with the drug. In November, the agency began investigating reports of depression, agitation and suicidal behavior among patients taking the popular twicedaily pill.

The agency’s announcement came two weeks after Pfizer added stronger warnings to the drug. In doing so, the company stressed that a direct link between Chantix and the reported psychiatric problems has not been established, but could not be ruled out.

Pfizer suggested that since nicotine withdrawal alone can cause mood swings and agitation, it may be impossible to determine if Chantix aggravates those behaviors.

But FDA said it found evidence of Chantix patients who experienced psychiatric problems even though they were still smoking.

“There are a number of compelling cases that look like they are the result of exposure to the drug itself and not other causes,” said Bob Rappaport, a director at FDA’s drug evaluation center. Some patients experienced the same psychiatric problems after they stopped using Chantix, he said, suggesting a negative reaction to withdrawal.

In a public advisory released Friday, FDA said patients taking Chantix should tell their doctor about any history of mental illness. Patients and family members should watch for any changes in mood and behavior.

FDA noted that patients with psychiatric problems were not included in the original studies used to test Chantix’s safety.

Approved in May 2006, Chantix has already been prescribed 4 million times in the U.S.

The tablets work by binding to nicotine receptors in the brain, reducing the symptoms of withdrawal.