The Letcher Central Cougar boys’ basketball team, with a record of 1-2, played its first district game last week against the Patriots of Knott County Central (2-2). Both teams are extremely young and the Cougars are just starting to adjust to having Charlie Banks back after football season.

The Cougars are led in scoring by Devon Blair, who came into the game averaging 17 points a game, followed by Eric Ison, who is averaging 12 points and 6 rebounds. Josh Profitt is also in double figures with 11 points a game.

The Cougars had led by as many as seven in the half but could not hold the lead. Knott Central’s Stewart Stamper had 11 points at the break as he continues to be one of the best players in the region. 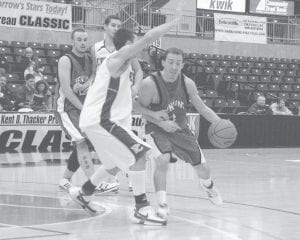 DRIVING TOWARD THE HOOP – Jenkins senior Eric Grim drove by the Pike County Central defense after getting a pick from teammate Nathaniel Wilder in the Kentucky Farm Bureau Classic tournament at the East Kentucky Expo Center in Pikeville. The Cavaliers lost the December 14 contest, 54-52. They rebounded on Monday night with a 49-39 win over Pound, Va. (Photo by Chris Anderson)

The Cougars opened the third and went up by three points early in the quarter. The teams went back and forth. With 6’8″ Eric Ison on the bench for the Cougars with three fouls, Knott County scored 6 points inside to lead 50-47. Stamper nailed a three-pointer near the end of the third quarter and drew a foul on the shot to give the Patriots a 7- point cushion. The Cougars’ Devon Blair dribbled the length of the floor and hit a trey just as the buzzer sounded to pull the Cougars back to within 4 after three quarters, 54-50.

The game stayed tight and very physical. Fouls mounted up in the fourth quarter for both teams. Jordon Reynolds tied game for the Cougars at 57 on a free throw, but Stamper would sneak inside for an easy bucket and the Patriots pulled back in front by 2 with 2 minutes left. They lead by 3 at 62-59 after Stamper hit a pair of free throws following Charlie Banks making his free throws on the Cougars’ end.

With 12 seconds left, the Patriots called timeout. After setting up their play they threw the ball to Bartrum and as he leaned into the Cougar defender he nailed a three-pointer as the horn sounded and the Patriots had pulled it out 65-62. The Cougars were stunned as they fell to 1-3 and the Patriots improved to 3-2.

The Cougars will continue to improve. They hit 52 percent for the game as well as 6-11 three pointers. They were led by Charlie Banks with 16 points followed by Devon Blair with 12. Malachi Longworth and Josh Profitt each had 9 and Eric Ison had 8. Jordon Reynolds and Cole Cornett each came up with 2 points.

On Saturday night the Cougars traveled and took on North Laurel. The Jaguars came in at 2-1 and the Cougars were 1-3.

It was another heartbreaker for the Cougars but believe me, this will only help the Cougars later on. These close games will turn into victories.

Junior guard Josh Seidel was on fire for the Jaguars as he poured in 40 points to lead everyone in scoring. The Cougars’ big guns did their part as Charlie Banks came up huge with 26 points followed closely by Devon Blair with 21. Josh Profitt hit for 15 points followed in double figures by Jordon Reynolds with 10. Other scoring had Ison with 5, Brock with 4, Longworth with 3, and Gose and Cornett with 2 each.

The Cougars fell to 1-4 on the season but they will continue to improve and they will be fine once everyone figures out his role.

The Lady Cougars saw their record also slip to 1-4 as they fell to region powerhouse Breathitt County 56-48 at home.

The Lady Cougars were led by sophomore Brittany Sexton with 18 points followed by junior Sharaye Kincer with 13 points. With so many new faces in the lineup it will just take time and patience for the Lady Cougars, but they will be okay by tournament time.