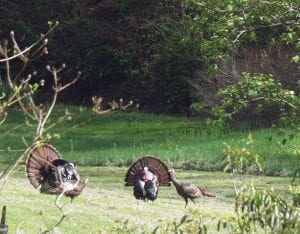 Two gobblers were displaying their feathers earlier this week while trying to attract the attention of two hens that were in their presence but appeared to pay little attention to them. Spring wild turkey hunting season began in Kentucky on April 18 and ends May 10. (Eagle Photo)