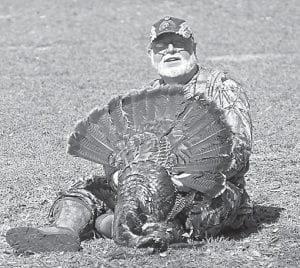 Steve Brewer posed for the photo in Florida after killing the second of two Osceola wild turkeys during a hunting trip there this month.

My Florida turkey hunt is in my rearview, and now I prepare myself to hunt the West. I got two Osceola, but failed miserably at my Eastern and wild boar hunts.

Truth is, the outfitter never took me on my hog hunt. He was too interested in having me guide a young man from Indiana who was trying to get his first Osceola. I was in a state of confusion, not knowing the area where we were sent, so he would have been as well off by himself. That is why I like to use the same outfitter every time.

I tagged out on my Osceola the first two days of hunting, then moved north to Perry, Florida to try for a wild boar, but you see how that came out. No more hunting with that outfitter.

If any of you want a job, I’m sure one of the fee-grabbing cities in the South would give you one. Never in all my life have I seen so many police officers with so many people pulled over. If the speed limit is 25 miles per hour, I go 15 and still don’t feel safe. If you travel through any of the following states this summer on vacation, watch out for speed traps. They are Virginia, North Carolina, South Carolina, Georgia, and, most importantly, Florida. I always feel good to escape from those states without a ticket.

Well more next week on our adventures together. I’m off to nurse my fire ant bites. Stupid me sit right down on one. Wow, that hurts.