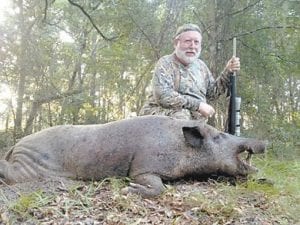 When we left off last week, Felber and myself had met up with our outfitter and guides with their dogs to start the wild boar hunt in Florida.

It was 6:15 a.m. The day was already breaking the way a great hunt should start. The morning was cool and the hunting party was on time. Even Felber was in full stride. A few minutes after the hunt started, Felber was already raising hell with the outfitter because his part of the windshield was fogged. Not a great way to impress your outfitter when he is the man that can keep you in the truck all day or find you something to kill.

After that episode, things smoothed out and we hunted until 8:20, when the dogs finally struck. One of the guides told me to load my rifle while he got the pitbulls ready. They use cur dogs to hit and then bay, but use pitbulls to fight the boars. Within just a few minutes, I was running with the guides through the swamps full of bugs and snakes and, of course, palmetto bushes tearing at our clothes and our flesh. Then I came upon the sight of a lifetime. The dogs had the biggest boar I have ever seen bayed.

Although I have hunted boars before, nothing — and I mean nothing — compared to this old man from the swamps. The outfitter told me to get ready for a shot, but the boar had one of his pit bulls pinned to the ground and a shot wasn’t possible at that point. You shoot one of their dogs, that is $5,000 and you sure couldn’t stand that. R.T., my outfitter, told me to be ready because he was going to call the dogs off. I thought there would be no way those dogs would back off that thing, but when R.T. said “back,” it was as if a light switch went on and they backed up so I could get a shot.

My 30.06 bolt-action Mossberg, with my matching Nikon scope cracked and the Nosler 180 grain bullet found its mark just behind the boar’s protective plate. Of all the luck, he fell right in the deepest part of the canal and sunk to the bottom. Without even thinking about it the guides jumped in the water to get my boar while I kept a watchful eye on the gators lying on the bank.

The boar field-dressed at 325 pounds. Join me again next week in the swamps of Florida when Felber takes up the hunt.