Season’s off to a good start already 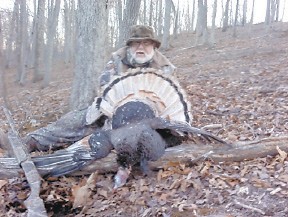 Writer and turkey hunting enthusiast Steve Brewer says the Merriam wild turkey he is posing with is “my prettiest turkey period.”

Well, my 2014 turkey season has started off with a bang.

I hunted with the Rosebud Indians in South Dakota this past week, on a “Draw” hunt. Although I killed the prettiest Merriam turkey of my life, also my prettiest turkey period, see picture I sent, it did have its moments. I hope it has my rookie mistakes over with for the rest of the season.

First, we were late getting into the “Badlands”, then I was put with a guide that I have underwear older than, and I could tell, I would be better off without him. But when in Rome, do as they do, so I didn’t say anything.

It was well after daylight, and he told me he was going to hit his call. He did, a locater call. At that time of morning it should have been a hen call. We got nothing from the birds.

After walking about half a mile, he decided to call again. This time I ask him to use a hen call. He did, and the gobble shook me in my boots.

I looked and there stood two big longbeards within 50 yards. No decoy set, no mask to cover our face, just us, the turkeys, and wide open space as they hurried up to get with the hens. I jumped behind a small tree, my guide jumped beside me, and was shaking like a leaf. I first had to calm him down, and tried to shut him up; he just kept calling.

Any turkey hunter knows to stop calling when you have them coming, for sure when you can see them at 30 yards and closing fast.

At about 20 yards, I had all I could stand, although I was really enjoying their show. By the way, that is part of the hunt.

When you see red, throw the lead, and that I did. I saw him go down, then the guide said he is back up. I could only kill one, and I thought he was looking at the other turkey, then I looked, he was right, my turkey was indeed up, and running. Second shot didn’t seem to slow him down, but I put a third shot his way, game over.

Did I say I hope no more rookie mistakes this year?