A young girl gets her ‘longbeard’ 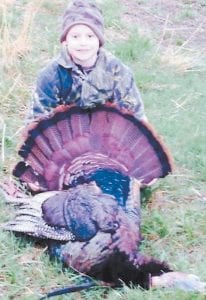 Dakota Johnson killed this wild turkey earlier this month during the youth turkey hunt. He was accompanied by his dad, Rook Johnson. Dakota is the grandson of Elijah and Mary Johnson of Jenkins.

Nothing thrills my heart more than to see parents take an interest in their children, and take them hunting and fishing — nothing. The stories are rolling in as fast as I can write, keep them coming.

This week, I am especially proud of this little lady. Her name is Rebecca Bailey, and I know, and have been friends with her entire family forever. Her Papaw, Bill Lewis, must be chomping at the bit to read her story.

Rebecca’s the daughter of Randy and Sharie Bailey, who are the kind of parents we need.

On with her story. Seems Rebecca had a tough time during Youth season. She shot at and missed three longbeards. Disappointed, yes, defeated no way. Seems her 20 gauge shotgun was shooting somewhat high, some fiber optics fixed that problem.

On opening day, April 12, she was back in her blind with her dad at 6 a.m. sharp. Wasn’t too long some jakes started their usual morning talk, and soon the whole woods was alive with gobbling. Randy could even hear the longbeards drumming on the roost.

They both had to sit and watch as the big boys hit the ground, and the hens took them in the other direction away from Randy’s calls. But things were looking up for Rebecca. A lone longbeard came to their calls, and spotted the hen decoy, then he strutted their way. It took him 15 minutes to strut within range of her trusty 20 gauge, hammer down, game over.

I can see in my mind’s eye the thrill on their faces. Her longbeard came in at 11-inch beard, 11/8- inch spurs, and a whopping 23.4 pounds. Nope it don’t get better than this.

Rebecca has a sister, Ariana.