The thrill of hunting a wild boar 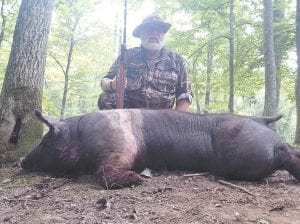 Columnist Steve Brewer wants all Kentucky hunters to be able to experience the thrill of hunting a wild boar, like this Brewer killed last week.

The telephone rings. I look at the caller ID and I know something good is about to happen in my life. It is my friends from DD Ranch, Donnie and Nina Carte.

It has been a while since I hunted with them, so before I answer I take a deep breath, hoping they are inviting me for a hunt. My wish comes true!

Donnie tells me he has a few wild boars running on his property and asks if I would like to head north to hunt for a few days. I don’t even stop to think about it, and tell him I will be there the next morning around daylight.

I left my house at 2 a.m. for the 4-1/2 hour trip with my hunting buddy, Rick Hardy, in toll. We were off to hunt the most feared animal in the nation, according to the Kentucky Department of Fish and Wildlife, and the one animal they will never let us have an open season on again.

For everyone’s information, back in the day when we had some wild boar still roaming our forests in counties such as Wayne, Cumberland, Whitley, and McCreary, we had an open season. But the guys at the Department of Fish and Wildlife found they had to let the Department of Agriculture regulate hogs, because there are classified as farm animals instead of wildlife. I’ve always been told it is hard for someone to give up power, even harder to share that power. Good-bye season.

When we arrived at the Ranch we were greeted by the same friendly faces that have been there for years, and off we went into the woods to try to find a herd of hogs, which are mostly creatures of the night.

It was a beautiful morning, cool for the 11th day of July at only 59 degrees. After three hours of walking, sitting, glassing, and guessing, Rick Hardy leaned over to me and said, “I see two.” Never has there been a message anymore welcome.

Although it was a three-day hunt, it is always nice to get the job done and get on with life. The boars were about 200 yards away and in a thicket. They are excellent when it comes to smell and sound, but are almost blind in sight. The wind was hitting us right in the face, so I knew they couldn’t smell us, and the dew had the ground damp, so there was no sound. Trouble was, we couldn’t get a broadside shot. They just wouldn’t turn.

We eased to within about 40 yards. I told Rick, “We are going to have to take a front shot. Can you do it?” He said yes, and on three we pulled the triggers, game over.

I just took the hams off the smoker. They are great.

As long as we let the officials in Kentucky tell us what to hunt instead of us telling them (remember they work for us, or are supposed to), most hunters here will never know the thrill of hunting a wild boar.