Hunting in the worst state in the U.S. 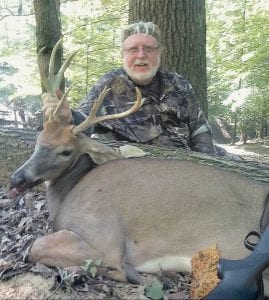 Columnist Steve Brewer poses with a deer he killed on a recent trip to Texas, where he also successfully harvested a wild boar.

Texas is one of my least favorite places to hunt. It is not because of the lack of wildlife to hunt. They have about anything you want to hunt, from elk to deer to rattlesnakes, (not on my list of things to hunt, there or anywhere else). Rams and goats abound, and the weather is usually nice, even if you go there to hunt in January.

The reason why I don’t like to hunt in Texas is the people. Not only is nearly all of the state privately owned, only three percent of land is public and the owners know they can charge just about what they want. Still, people will travel to hunt there — and pay a war pension to get the chance.

Nearly everyone from Texas you speak with wants to leave the United States and have the state form its own Republic. Never mind that for every dollar Texans send to the government they get three in return. They tried leaving in 1861, and you know how that worked for them. Those who cannot learn from history are doomed to repeat it, someone once said. Never has that been truer than in Texas.

Two of my friends and me just got through hunting in Texas because the Commonwealth of Kentucky thinks that wild boar will over run us and make the deer go to other places. That, my friends, is simply not true. Texas will invite us down to hunt their wild boar and cull deer. The ranchers charge by the inch but tell you to kill every hog you see — for a price.

On this trip, three weekend warriors — hunters that only hunt one or two weekends a season — also showed up. They were from West Virginia. They traveled all that way to Texas before they realized they hadn’t brought any hunting clothes. No boots, not a shirt, not a pair of pants, nothing. I just shook my head. I had a great hunt. I killed a wild boar and a nice deer, which is the only reason to go to Texas.

I wish the Kentucky Department of Fish and Wildlife would see the benefits in allowing wild boar hunting, and would help stock them as well. Until they do the money will keep going to Texas — the worst state in the Union.