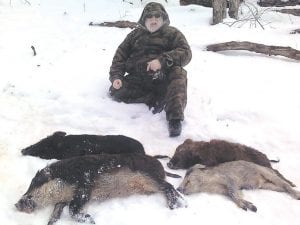 As you can see from the picture I had an awesome wild boar hunt.

In hunting camp with me were three men from Georgetown, who were also hunting wild boar. I cannot figure for the life of me why the Kentucky Department of Fish and Wildlife won’t allow us a wild boar season.

When I was a young man we had some wild boar in Kentucky. They were in the Cumberland National Forest, what is now known as the Daniel Boone National Forest. They were, if my memory serves me correctly, in Whitley, Wayne, and McCreary counties. When I was 16 years old I hunted them once in Mc- Creary County.

We still have an open season on a few wild boars located on the near the Tennessee line in the Big South Fork National River Area. The controls are very tight from Kentucky Fish and Wildlife. Hunt- ing is limited. Truth be known, the state would rather you didn’t hunt them. One reason wildlife officials don’t want wild boar is because of the destruction of farm land. Reality check: The Daniel Boone National Forest may have farmland outiside the forest, but it is trees, fields and some grassy bottoms.

As I am on the backside of life, things will not change while I am still hunting, I am sure. But the money this Commonwealth is losing by keeping us from hunting wild boar has to be in the millions of dollars.

I will be heading to Florida March 18 to again wild boar and turkey hunt, money that could stay home and spent in one of our poorest counties if we only had a season. I am not happy to think about all the Kentucky hunters I meet in hunting camps in other states, when I know an open season would be a boost to our hunters and the Commonwealth’s pocketbook.