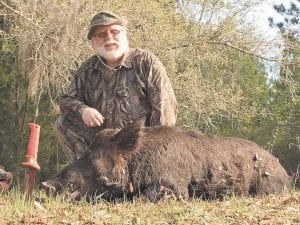 Columnist Steve Brewer faced several obstacles, including poisonous cottonmouth snakes, on his way to killing this wild boar in Florda.

Well, I am back from Florida, and from all the e-mails I got, I see you missed “Struttin’ Time” last week.

Thanks for your questions as to why we were not in The Mountain Eagle, but remember I need to go places were there are no computers to get the stories we write about.

Well, we arrived in Palatka, Fla., as planned, and readied ourselves for the evening wild boar hunt. After getting into the swamp around 3 p.m., I had some doubts about getting anything our first night and my hunch was right.

It was 90 degrees, much too hot for wild boar to be out until well after dark. The night fell without even seeing anything.

The next morning, it was off into the swamp at first light. The dogs hit one about 10:30 a.m. My hunting buddy, Donnie Mullins, from Elkhart, Ind., whom I have hunted with before, was after his second knife kill. Last time I saw him do that I climbed a tree, but this year I had made up my mind to try and get one with a knife.

Once we caught up with the dogs and after the guide had killed six cottonmouths, never seen any gators, it was time to turn the pit bull dogs loose. Once they got the wild boar’s attention, Donnie went in for the kill. It was a monster weighing over 300 pounds, with four-inch tusks.

My turn came fast, as the dogs hit within 30 minutes, and through the swamps we went again, me with my trusted rifle. But as the wild boar was bayed and the pit bulls were doing their job, the guide handed me a knife, and I joined the class of hunters that has used a knife to get his meal.

While running through the swamp after my hog, they added two more cottonmouths to their list. My hog weighted in at 260 pounds and had three-and-a-half inch tusk.

Next week we will talk about our Osceola turkey hun on this same trip. All you need to do is buy a Mountain Eagle and enjoy our hunt for a dollar. It cost me $1,500. Now I see why hunters get sponsors. Till next week!