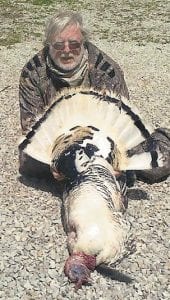 Columnist Steve Brewer says this Eastern turkey is the most beautiful wild turkey he has harvested in more than 60 years of hunting.

After returning from Kansas last week, I realize that my beloved sport of hunting and I are closer to parting ways.

I am almost beyond repair, having already driven more than 6,000 miles this year alone to hunt. After taking the most beautiful turkey of my life last week and carrying it from the woods, I now know my hunting days are growing shorter. But how could a person feel bad about it, after more than 60 years of doing what he or she enjoys?

But Struttin’ Time is not about me, it is about our friends and neighbors who take a few minutes out of their busy life each week to sit down with their favorite drink and get lost in the stories. So is the case with my lifelong friend, Raymond “Pap” Brown, of Raymond’s Branch at Dry Fork.

I just have to tell this story on him. For years Pap has complained about the black bears that will come onto his farm and kill his chickens, eat his honey, and in general make his life miserable. Well, last week it was Pap’s turn to settle the score. He finally shot one of the bears.

Pap has been fighting cancer for the last little while, so he didn’t need a black bear making things any harder. He just pulled the trigger. Pap had called the Department of Fish and Wildlife several times to ask what could they do about the bears. They told him nothing, so he handled it himself this time.

I would have loved to be a fly on the wall when the phone rang at the Department’s office. Before they answered it, they probably smiled at each other and said, “Its Brown again, probably calling about a bear.”

Then, when Pap told them, “No need to worry, I have it shot on my porch,” the looks on their face were probably blank.

From what I have been told, the wildlife officials were there, two of them, in a matter of minutes. They then removed everything, except a memory, and wouldn’t even allow Pap a roast off the bear. That is all right though, Pap has shown that he will not be bothered with the, and will not tolerate having damage as the price of having bears.

By the way, even though Pap has been in the hospital more than he has been out since August, he has never missed reading a Struttin’ Time. Now that is a real fan and friend!