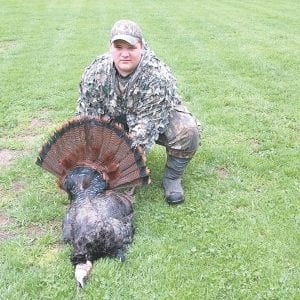 Larry Barber III has been hunting since he was six years old. He harvested this 22-pounder during the spring season.

Well, sometime we are a little slow, but we still get the job done. I have had this story on my desk for a few weeks, but never seemed to get it written. But things are about to change, starting now.

Larry Barber III, known as Trey, lives in Morehead and is well on his way to being a great hunter. He has been hunting since the age of six, and has tagged out every year during turkey season. Trey, that is something us old hunters fail to do.

He is the son of Larry Barber II and Michelle Nelson Barber. Michelle is the daughter of Larry and Nettie Nelson, formerly of Neon. His long beard this year, although he may have killed a second one as well, measured 22 pounds, 11- inch spurs, and a one-inch beard.

We hunters, and other parents, could learn a lesson from this kid. If you get your child outdoors, they will hunt and fish, and love it. Trey is now 16 years old, and his love for the outdoors grows each year.

Tip of my hat to you, big buddy, may you never lose the passion you now have for what God has loaned us to use.

I would like to remind everyone that spring squirrel season is in until June 19, and the daily limit is six. There are squirrels running everywhere, the mornings have been cool, and this is a great time to get your youth outdoors.