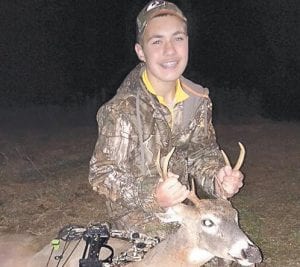 I love stories like this one. My little buddy Nick Burke Mason, a 13-year-old eighth grader, already knows what it is like to stay the course in life.

Nick took on a major challenge when he went archery hunting at the Baker farm near Nancy, Kentucky last week. Although the farm itself is level, it is like the top of a cook stove — the land around the farm is straight up and down. I have helped drag several deer from there. To say it is a mission is an understatement.

Nick, the son of Brandon and Donna Mason of Letcher County, has the right stuff to go hunting there. If you remember, a few weeks ago we did a story on Donna after she killed a deer with her bow behind their house. That only leaves Brandon left to take a deer, and with modern firearm season in he may report this week.

In the meantime, Donna, and Nick are kicked back with their bucks and the memory of their hunts. Nick loves to get involved in things like hunting, and fishing, and his parents give him the room to do those things as well as expand. I love parents that take time for their children.

I won’t be one bit surprised to see Nick with a Boone and Crockett deer soon. He has what it takes, and after getting a deer from the bottom to the top of that mountain he will need to take a long rest. Going through his mind, I think, was, “this nice buck is worth it.” Yep, and on he will go, hunting and enjoying life as a kid.

If more parents took time with their families, I am sure we would have better kids. It is all up to the parents. So here is a tip of my hat to you big fellow. I expect more from you in the near future. And thank you, Brandon and Donna Mason, for helping Nick to be all he can be.