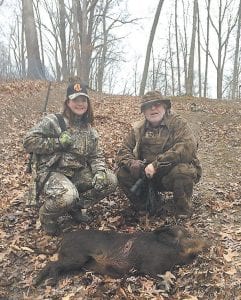 We have started a new year, and if it is anything like the one that just finished it will be a dandy.

We closed the year on December 31 with a very “special hunt” that originated while I was being Santa in Georgetown. There I met one of the nicest families, the family of Paul and Lynn and — one who is turning into my best hunting buddy in years — their daughter MaKayla Dugan. They are from Jenkins but now living in Georgetown, Paul being a victim of the downturn in the coal industry.

Meeting them in Georgetown would be a good story by itself, but it goes deeper than that. You see MaKayla is the granddaughter of one of the best friends I ever had, Jim Arnold Holbrook. Jim Arnold was a barber, and in the 70’s had his shop in Neon. Jim Arnold, along with a few more friends and I, fished together every day at the old Barlow Lake in Neon. We called ourselves “The Uptown Fisherman’s Club” and had a blast.

I took a liking right off to MaKayla and found out she liked to hunt and fish. She is already living in my world — the great outdoors. I asked her if she would like to go on a wild boar hunt. She is 15 years old, and I figured we might as well start things off right since she wasn’t getting any younger. She said yes without a second thought. I asked Lynn if she would like to go, too, and she was as excited as MaKayla. Then I asked Paul, and he too was thrilled, but then things went downhill for a couple days.

We were to hunt the Monday after Christmas, but because of my friend Dan Carte having a company to come hunt with him that had eight hunters, he had no room at the lodge and our hunt was put off until Thursday. Instead of staying overnight we would drive up that morning for the hunt. That move may have slowed us down, but the mood never chilled.

I met the Dugans at 4:30 that morning in Winchester. MaKayla loaded up with me and off we went. I could tell she was excited, and she even looked like a hunter, all decked out in her new camo her grandmother, Duretha Shepard Maxwell of Dunham, had surprised her with at Christmas. I could see her excitement build, and when we pulled into the ranch parking lot I could tell she was ready.

After a few minutes of safety instruction off we went — Paul, Lynn, MaKayla, guide and me. I thought that with all these hunters in the woods these wild boars should still be stirring, as they are nocturnal in nature. It wasn’t long before her dad said, “Here comes one.” There were actually two, and MaKayla raised her rifle. She shot at the second wild boar, but missed. It wasn’t her fault, but mine. I had not made the rifle available to her to practice with, and it was new to her.

By the time some more wild boars came into view she was ready. As the shot sounded the guide gave a shout, “It is down!” The wild boar that was following the one MaKayla downed stood over the felled one, ready to charge Paul and MaKayla but changed its mind and ran away.

I have seen many young hunters happy, but none anymore so than MaKayla. She is like her grandfather — she loves the thrill.

We will be planning a wild turkey hunt when season opens. My money is on MaKayla to down a long beard during her first season. Fifteen years old and already got a wild boar down? Wow!