Writer gets his first Axis deer 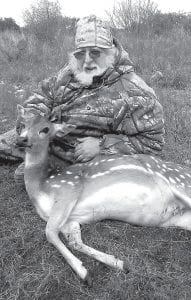 Steve Brewer relaxes in Texas after killing his first Axis deer on a recent hunting trip there.

Our last journey for 2017. It has been a year of ups and downs, the face of victory, the agony of defeat. We have traveled the United States over, you and me, hunting this year, you and I together, we have thought outside the box.

The miles and the years have taken their greatest toll on this old hunter this year. The Texas trip was a total of 2,700 miles round trip, just a few miles short of our Maine black bear hunt.

While at the hunting lodge in Texas, I was reminded every day that I could take a whitetail buck, but if I did, I couldn’t take an Axis buck. I was allowed one Axis buck, two Axis does, all the wild hogs I wanted, and a couple turkeys.

Every day on my weeklong hunt I saw a group of wild hogs, always at daylight. I wouldn’t shoot for fear of running off my Axis buck that may have been just around the corner. Same with turkeys, man they had the numbers. I wouldn’t care to say I saw well over 500, most of which where hens, but I would not kill a hen, and that was what I was allowed.

On the third day at dark I did tag this nice Axis doe. She was a five year old. As soon as I posted her, some people were saying, “You killed a fawn.” Although I told them it was an Axis deer from the start, and Axis deer always have spots. You see how much people pay attention.

Well, I promised you an update on my Texas hunt, and here it is.

I never got my Axis buck, but I got a Axis deer, which means, you and I were thinking outside the box.

Well, see you next year, merry Christmas, and a happy New Year. Till next season, sit high in the saddle, and ride with the wind at your back.