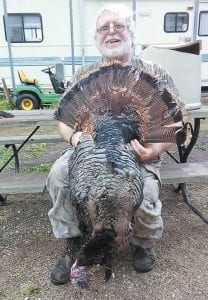 As the years fly by like the white lines on a highway, I often sit and ponder of things that were, things that could have been, and things that may yet come.

I just returned from my Kansas turkey hunting trip, where once again I harvested two nice long beards. Once again, I hunted with my friends that I first hunted with many years ago, Tom and Vonda Palmer and Bill and Sandee Anderson.

That hunt goes like this. Tom and Vonda provide me with a very nice lodge, and food, Bill and Sandee, the ranch to hunt on. I love Little Creek Ranch. It is located in Lebanon, Kansas, up next to the Nebraska border. I would recommend any hunter trying to complete his “slam” to find these people and hunt with them. In all the years I have hunted there, I have never failed to fill my tags if I was shooting straight.

Remember I have told you readers sometime my shooting sucks.

The old saying, “Come as a customer, leave as a friend” was coined for these people. I am booked with them again for 2018, if I am still on God’s green earth and health permits.

The 2017 season started with the 900-mile journey to their lodge in Cawker City, Kansas, 20 miles south of the Little Creek Ranch. For too many years to count, I have always been met with open arms and smiling faces. After checking into the lodge, it is off to scout and set up my blind with Bill giving me pictures and advice on where the turkey are. Then back to Tom and Vonda’s for a great meal and to renew friendships.

Opening morning broke with the Kansas wind that is always blowing, really howling. A few minutes after daybreak, here came the rain and lightning. All you can do at that point is hunker down and keep calling. It paid off for me around 9:45, when a nice mature gobbler met his doom. I stayed in the blind until five, but never got another shot. By the way, you can kill more than one turkey a day in Kansas.

Daylight on the second morning broke so nice, it was like being at the beach. I heard gobbling everywhere, which is normal for that area after a storm. Not much after daylight I started to see turkeys, but things really heated up when two brood hens came to my calls and started beating up on my decoys. They were mad. I just stopped calling, they were doing it for me. They left, only to return a few minutes later, same show as before. I knew it wouldn’t be long before they brought in the boss hen, and behind her, the “Big Boy”.

I could never have been prepared for what happened next. The whole bottom was covered with turkeys, they were everywhere and coming to my decoys. The boss hen wasn’t happy. I figured there were somewhere between 30 to 35, and best of all, I saw there were probably 10 long beards, but not the “Strutter” as of yet. That is the one I wanted, so I just waited.

It soon paid off, here he came, wide open. These other birds never made a sound, all the way to my decoys. He fanned, he gobbled, I shot, game over.

Although most of the other long beards were much bigger than the “Strutter”, he was boss. He had a nine-inch beard and one-inch spurs, and weighed in around 22 pounds. My hunt ended at 10 a.m.