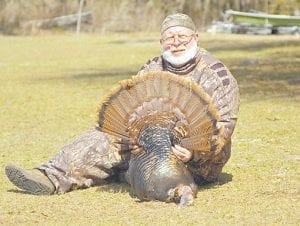 I’m back after missing my column for a week. I can now say I have lived through the long hard winter and made it to turkey season!

I read in last week’s Mountain
Eagle
where it is supposed to be a bumper year for turkey, and from all I’ve seen the reports could be right. I just got off the road from hunting in a special-opportunity hunt in Nebraska. I bagged a nice 24-pound Merriam. He had a 10- inch beard, and 1-1/2-inch spur. I left from that hunt on March 17 and went to Florida to get an Osceola. I sent my friend Ben Gish some pictures of these birds, and my hope is he will share them with you in The Eagle.

In Florida, I just about froze to death in the early morning, although the day warmed up nicely. I saw tons of turkeys, and bagged a nice 20-pound bird. He had ¾-inch spurs, and an 11-inch beard. Sorry about missing last week’s Struttin Time, but sometime we need to stop talking and start doing. All winter we have talked about hunting, now we must put it to action. I had no computer where I was. 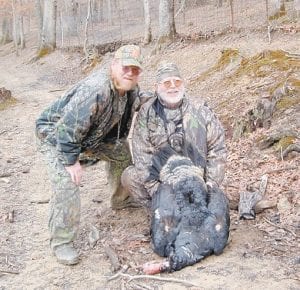 At left, Brewer and a guide pose with a 24-pound Merriam wild turkey Brewer took in a special opportunity hunt in Nebraska on March 17.

The Florida trip is one for the memory book. On opening day the roar of the longbeards shook the earth. They flew down in the middle of a 90-acre “ tater patch” and that is where they stayed. On the third day of the hunt, me and my guide had a plan. We would get in a canal, walk the mile from one side to the other, and then we would be able to get a shot. Minor problem, the canal had about three feet of water in it. But we have been wet before, so in we went. Major problem, a mean ole gator lived in the canal and he didn’t want us there. I saw him slide into the water, then lost sight of him for a minute, only to see him come up eye ball to eye ball with me. Panic ensued. I learned fast that hollering at a gator doesn’t bother him. He doesn’t have ears, and hitting him with your gun makes him real mad. But when I’m afraid, nothing can outrun me, and I was in high gear before he could react. I ran the field in just a matter of seconds, gator in tow. After a few minutes he stopped, and I was never so happy. My guide is still laughing. We never tried that again.

That evening I got my longbeard, by sitting and calling, not sneaking and crawling. The season still has not opened in most states, and I have already gotten half of a Grand Slam with the hardest one to get, the Osceola.

Our youth season starts April 3 and 4. Take a youth hunting. It is our only hope of saving our sport.