Actions, reactions, and a Texas hunt 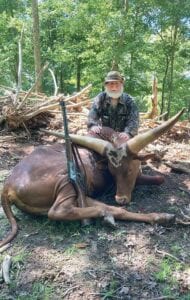 Columnist Steve Brewer writes that he will have enough meat to last a full year after harvesting this Watusi bull in Texas.

Ruby Zidaroff, my longtime teacher at McRoberts Grade School, taught me that for every action, there is an equal reaction. I have watched through the years, and she was spot on.

The latest action is we have been hit with a very dangerous virus. Now for you who still don’t believe we have this virus, go ask a family member that has lost a loved one because of it.

Myself, being a hunter since six years old, I saw the reaction come from the action of the virus almost overnight. I had turkey tags for several states out west. Not only did Governor Beshear tell us not to travel out of state — and I never did — the western states closed their season to all non-residents, meaning my hunt to Mexico was cancelled because the border was closed.

The next reaction to the virus was prices starting to rise. A three-pound roll of 93-7 ground beef went from $8.97 to $18.97, and it was a cheaper grade, 80-20. Then the other foot fell; there was a shortage. I got through turkey season pretty well, but my freezer was getting low. I have three of them, so worry started to creep in.

A few weeks ago, an outfitter friend of mine said he had a cancellation on a hunt for Watusi and asked if I would like to take the hunt. With beef prices so high, us common people can’t buy it, if you can even find it, so I never took another breath before telling him yes. Then he went into the hunt itself. The temperatures would be in the high 90s, maybe 100 degrees. It would be a hunt though mountains, and it would not be a for-sure kill. I took it anyway.

In case any of you are wondering just what a Watusi is, it is an African beef released in some states to protect them from being totally wiped out by overkill. There are as many here now as there is in their native land, Texas having the most.

After a six-hour hunt, I was finally able to bring the big boy down. It was 100 degrees right on the money. The hunt had taken many miles, but I have a year’s supply of beef for my table.

I took it with a Winchester Model 94 saddle gun that probably hasn’t been fired in over 40 years. It is a gun that was left to me by my PapPaw Lee and Grandmother Ruth Duncil in 1958. That made the hunt even more special.

I must end on this note. I got a message from Georgia telling me how much they enjoy Struttin’ Time and Gabby’s column. I used to hunt with her family years ago when they lived at Mayking. Old friendships never die. Thanks for being a friend of mine since you were a child.

See you next week.