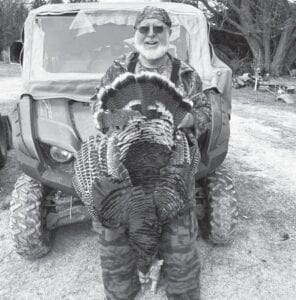 Struttin’ Time columnist Steve Brewer poses with a wild turkey he killed recently during a hunting trip to Kansas.

This has been a real turkey season. I can tell by the messages and pictures I have been sent by my hunting buddies, and there have been some really nice ones.

A tip of my hat for a job well done to all the turkey hunters who have let me know how their season has gone.

When I learned in the 1990’s that there were more than one sub-species of wild turkey — the Eastern, Rio, Merriam, and the Osceola, along with the Gould and Ocellated — my mind started thinking outside the box and I decided to go for the “Grand Slam,” which is one turkey from each of the top four sub-species.

I got that done in 2006.I have sought the other two ever since. I go to Mexico on May 9 after the Gould turkey. As I have always said, hunting is not about a kill, it is about the adventure and I have proven myself right many times. In the early 2000’s I started hunting points out west. Kansas, being my cheapest hunt by far, was and is my go-to place.

I met an old rancher who owns Little Creek Ranch, around Lebanon, Kansas. His name is Bill Anderson. With the exception of last year, I have hunted with him and his lovely wife, Sandee, every year since, and all but one year I have taken turkeys.

This turkey season, I found myself on his ranch on the day before season opened. Bill and Sandee have always treated me like a close family member, and this year was no exception. I have cut short my western hunts because the miles and years have taken their toll on my old body. This time I set up in a field and before I knew it, the turkeys were there.

Still, I had to set up beyond their strut zone, and although they would look at my decoys they would not move toward them. Fine with me, I would just enjoy the show, and I did for about two hours. When they left, I went into action, moving into their strut zone, for the next day’s hunt I knew they would return. So I went back to the ranch house and there stood a stranger to me. She called out several names, none of which was mine. She laughed, I laughed, and we started an instant friendship. Her name is Tamatha Schurr, and she is the youngest daughter of my friend, Bill.

It ’s always all about the adventure, remember that. We went inside, and I was amazed that I hadn’t know about her after hunting with Bill all these years, but better later than never. She comes to the ranch a few days a week now to help Sandee and Bill, who has been found to have cancer. I have met many nice people on these hunts, some as nice but none nicer than Tamatha. She told me to call her just plain Tam, so that is what I will stick with. We enjoyed our visit — Tam, Bill, and me — but all things must come to an end, and so did our day.

The next morning, here came the same four big toms into their strut zone. Game on and over in the same split second. When I see the red, I throw the lead. My shot never seemed to make a death blow, so I shot the same turkey again, giving the other three a chance to get away. In Kansas, as long as you have a tag, you can pull the trigger, unlike Kentucky where you are only allowed one a day. It’s a stupid law to be only allowed one a day when there are several long beards within range, in my opinion.

Anyway, it was a little after 9 a.m., I headed to the ranch house. There was Bill and Sandee, but not a sign of the young lady I had met the day before, Tam. Kansas was expecting a huge snowstorm, and she had gone the 50 or so miles north to her job and home. Hunting is about the adventure, not the kill, and about getting to meet people like Tam, my dear friend Bill Anderson’s youngest daughter. That is what a hunting trip is all about, and I am thrilled I met her. Will we ever meet again? Only time will tell, but I am a better person for having met her, even for such a short time.

A little word to my hunting buddies that only hunt Eastern turkeys every year: Take a year or so to think outside the box and hunt other sub-species. You will have a blast.