Trip to Mexico beyond eye-opening 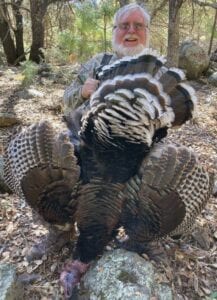 Julius Caesar once said, “I came, I saw, I conquered.” That is how it has been in my life.

My Gould wild turkey hunt to Mexico for my “Royal Slam” in turkey hunting was no difference. I knew where I was heading after I learned there are six different breeds of wild turkey. The Eastern is what we have here. The Rio is in states like Kansas, Texas, Nebraska, and a few others. The Merriam is in Wyoming, South Dakota, and others. The Osceola is native only to Florida. The Gould is in New Mexico and Arizona, but hunting them is on a draw system in those two states, so good luck there, so I went to Mexico. The Ocellated is also in Mexico and in Central America.

I set my sights on hunting and harvesting at least one of all six. I am now down to my last, the Ocellated, and I will try for him next year. I started trying to hunt Mexico for my Gould in 2006, but I was stopped by the Department of Homeland Security. I could not enter Mexico for several years after the department had determined it was too dangerous for Americans to travel there. The Mexican drug cartel, it seems, was killing Americans just for the fun of it. What a shame.

I kept my dreams alive by applying every year to either Arizona, which issues 10 nonresident turkey tags a year, or New Mexico, which lets non-residents have just two. They issue another one through an auction that has brought as high as $30,000, I have been told.

My time arrived, finally, this year. I came, I saw, and I conquered as you can see from my picture. I took a nice 24-pound Gould that sported a nine-inch beard and had one-inch spurs, not the biggest in Mexico, but big enough to bring my dream to life.

As soon as I crossed the border, I knew I had entered a world unlike any I had ever known. A world that time had forgotten. There was not a blade of grass to be seen in a place my guide, Gerardo Villalpando, told me had not seen a drop of rain in over a year. Although the native trees were green, I wondered how. The dying custom here in America of putting a cross or flowers on the side of the road after someone is killed on the highway is still strong in Mexico, except they build shrines ranging from doghouse size to eight feet by eight feet. People go almost daily, I am told, to pray at the shrine.

As we went farther into the desert the mountains loomed high above us, cresting out at around 9,000 feet. Our base camp was at 6,000 feet and would be my home for the next little bit. Gerardo told me we would be hunting at around 7,000 to 7,500 feet. He picked me up at the airport in El Paso, Texas and never left my side except to sleep at night. In camp they ran a generator for three hours a day, at 4 a.m. to wake us up and from dark to 10 p.m. Lights on, lights off.

The best camera in the world, of course, is your eyes. They never stop snapping pictures and your mind stores them for another time. There was so much to see I was afraid my eyes would run out of film.

The rancher who owns the 200,000 acres lives in a 5,000 square foot house with five outbuildings to house his cowboys. They travel on horseback and tend to 3,700 head of cattle. I was amazed when I looked at the cattle. They were, well, underfed in my opinion, and spent all day, and I guess night, trying to find food. When I was there the cowboys were working to separate the calves from their mothers. My heart broke from listening to the mothers wanting their babies back.

The cowboys worked all day in 90-degree heat, changed horses around noon, never took a break, and were always on the move with the dust was flying everywhere. I never saw coal miners work as hard as the cowboys did, and that is saying something. I saw cattle everywhere, as high as 8,000 feet, trying to find food and water. There was none to be found.

One of the things that struck me was all the wild feral hogs running around. The cowboys, my guide, the cooks, nor anybody even looked twice at them. There walks a goldmine for those people if they would open them up to hunting. Wild boar hunts bring in good money to ranchers who let hunters take them. I would say I saw well over a hundred wild hogs, from 15 pounds to 200 pounds.

Now I have given you the details of where we were hunting. Next week we will talk about the hunt that will be forever etched in the annals of my mind.