Black bears are in Mexico, too 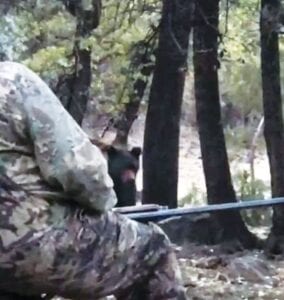 We arrived the evening of our first day of the hunt at OJO Caliente Outfitters, located at 6,000 feet above sea level, just in time for supper. I was amazed at how their lodge operated — on a timetable that would shame the way we do things.

The generator that powered the camp ran from 8 p.m. until 10 p.m., and when it went off so did the light in your room. No, in-the-room switches, no wall sockets. At 4 a.m. the generator started, your light came on, and you went to breakfast at 4:30. This would be our first day in which to hunt.

The 2500 Ram truck pulled from camp at 5 a.m. sharp, driving you many miles to your jump-off point to hunt. The trail is narrow, and several times I wondered if the truck could pass through. My guide, Gerardo Villalpando, never missed a beat. We finally stopped and walked about two miles. When he sat me down and told me it was a strut zone and to be ready, he placed himself about 20 yards behind me and started calling.

At 10 a.m., he got up and said let’s go. Strange to me, since in my turkey hunting world the gobblers are just starting to look for hens since the hens have left them going to their nest. But when in Rome, do as the Romans do. I followed without question.

Once back in camp, lunch was ready and Gerardo told me they would take a siesta and would see me at four, that I could do whatever I wanted to until then. Not being used to sleeping in the middle of the day, I made use of their front porch, enjoying the sights and sounds. At four sharp, Gerardo informed me we were ready to go.

It was a cool 90 degrees, not usual turkey hunting weather. We drove in a different direction, and about five miles later came to a stop. He said we walk from here. Some type of device he had on his phone indicated that we walked almost eight miles during the total of our hunt. I think about half of those eight miles came that evening. He finally sat me down and again placed himself behind me and started calling. It was so refreshing and strange to have someone else do my calling for me.

About 30 minutes at our setup, I noticed movement to my right. I noticed it was a black bear. Oops! As it walked straight in front of me, I could tell it was a female by the way she walked. I have killed 11 black bears so figuring out what it was wasn’t a problem. A female walks with her front legs straight and a male swags from side to side. This female would weigh probably 400 pounds. Then I noticed she was being closely followed by a 500-pound male. “Lord, feet, don’t fail me now.”

I was in a tight spot, but having years of experience in the mountains I knew my best bet was that the female bear would keep walking, and he would follow her. You see I know to be as still as possible and sitting still was my best bet. You can’t outrun a black bear; it is faster than a racehorse at a short distance. The wind was blowing in my face, so I knew they could not smell me.

As luck would have it, instead of her walking on, she stopped 12 yards in front of me. The male walked right beside her and kept coming toward me. He was six feet and standing up. When the female finally walked on he got back down on all fours and followed her. I had of course forgotten about Gerardo. He came to where I was sitting and with a sigh said, “Man you were sure cool during that.” He said he recorded the whole thing.

Then it struck me that I was Gerardo’s only line of defense. He didn’t even have a pocketknife. As we walked back to the truck, I looked over Gerardo’s shoulder and there was a mountain lion. After it made a fast exit Gerardo told me it was a female. Wow.

Next week we will look at the second and last day of my hunt. Stay tuned.