She perservered and it paid off 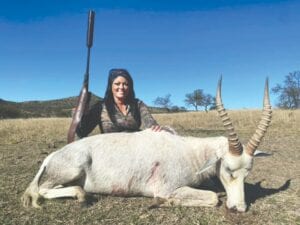 Bridgette Holbrook with the White Blesbok antelope she killed during a hunting trip to South Africa.

While planning any hunt to anywhere takes time and help, imagine the planning it takes to hunt the plains animals of South Africa?

Although I never had the desire to hunt in Africa, I have many friends who have taken the plunge. All of them had a blast. My latest friend to hunt South Africa is our very own Bridgette Holbrook, formally of Whitesburg.

Bridgette is the president and founder of “Wildlife Women.” If you are not a member, please join. You will be happy you did. Bridgette booked her hunt with Msenge African Safaris, and during her hunt stayed at Maweni Hunting Lodge in the Eastern Cape of South Africa. It was a distance of over 21,000 miles. Knowing how much 6,000 miles have worn me out hunting and fishing this year, I know it must have been a tiresome trip. The flight alone was 78 total hours.

Bridgette told me everywhere they went they were treated with love and respect. She has this outlook on life: “Don’t just dream, execute, bust through stereotypes, trust yourself, and always believe anything is possible.” She asks, what dream are you going to execute?

When she scored on her White Blesbok, she knew that animal was meant to be for her.

During the first couple days of hunting in Africa, Bridgette was struggling with her shot, as anyone who knows Bridgette knows she is an archery hunter by trade but will hunt with firearms when she needs to.

The first day, her professional hunter (PH) put her on a monster Kudu, which they had stalked for over three hours. However, when the opportunity arose her nerves kicked in and she missed her shot at 425 meters. She said she was really sad, but the PH just continued on, as though nothing had happened. They kept hunting and soon came across a beautiful Oryx.

“I pulled the trigger, and missed once again,” she said. “I was getting so upset with myself, that I was afraid I couldn’t get it done. I had practiced on my first morning, and was hitting dead on, but I was sitting down. Out in the real hunting world I was using shooting sticks and developed ‘Elvis’ legs. I kept trying to calm down, but only grew more nervous.”

Does Bridgette get it together? Tune in next week for the next part of her, “Thinking outside the box” hunting adventure.