Oryx proved to be a good choice 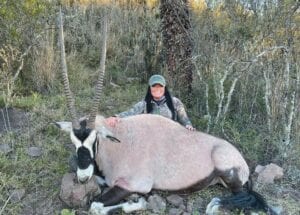 This is week three of covering Whitesburg’s own Bridgette Holbrook and her hunt to South Africa for that nation’s plains animals.

This edition of Struttin’ Time uses her own words. Enjoy.

“Still so many stories to tell from my South Africa trip. However, (with) jet lag, exhaustion, and playing catch up from being gone, I am lagging behind on my story.

“This amazing animal, the Oryx (antelope, pictured above) was definitely one of the coolest of my trip. Brad, one of my professional hunters (PH) had mentioned I may want to hunt the Oryx, and honestly, I had to research it to even know what it was. It wasn’t on my list but was moved to the top quickly. The first one we hunted, I was still struggling, and missed one a little bigger than the one I harvested. I was disappointed, but knew I wanted to try again.

“We went to another farm, after taking my white Blesbok that morning. After having a great morning success, I was hoping my luck would follow me. I had one harvest under me, and my confidence was really high. I was for sure I could make good shots now and was ready to find an Oryx. Hunting this Oryx which is also called a Gemsbok, is like hunting elk in southeastern Kentucky. You drive, glass, drive, glass, until you find a set of antlers. You stop and put on a stalk. This one really liked to play peek a boo. He kept hiding behind the bushes while we were stalking him. We had to move a couple times to get into a place where I could shoot.

“This time Russell, my other PH, had put bi-pods on the awesome 270 that I was hunting with. He had also put on a suppressor, which is the bomb. I got in position, on my tushy, and had to manipulate my body like a pretzel to get the shot, which was uphill. Needless to say, that is a hard position to hold. Russell and the Oryx kept playing hide and seek so he couldn’t get a good look through the binoculars to see if he was mature enough to shoot.

“One thing that was impressive is how they manage the animals to only harvest the oldest, most mature ones of the herd, and for food. After 40 minutes of back and forth of “leave him, no take him, no leave him,” the Oryx made a wrong move, and we got a perfect look at him. Russell grinned and gave the go ahead to shoot. I had already decided I wanted him; now I had to convince Russell. I told him I knew it, but partly I had held that position for so long it was now or never.

“I made a great shot, at 290 meters, uphill to harvest this amazing animal. But now the fun had ended, and the hard part of any hunt is getting your animal out.”

Next week we will again listen to Bridgette and share in her adventure.