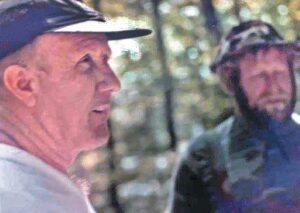 Columnist Steve Brewer (right) and his late father were photographed on a hunting trip in the early 1980s.

The third Saturday in August has always been, and will always be, a day in my life that is burned into my soul forever.

Yep, it is the opening day of squirrel season in the Commonwealth of Kentucky. Except for a couple of years, back in the 70’s when our Kentucky Department of Fish and Wildlife decided to change the opening to Labor Day, we have always lived with the third Saturday. The mountain hunters raised such a fit over the change the Department never had much of a choice but to move it back to the third Saturday in August.

Some of my fondest memories are gathered around opening day of squirrel season. My dad would haul us to his uncle’s tobacco farm in Wolfe County, where the heat of August never affected us as much when walking flat land as it did in the mountains.

Back then it was almost a five-hour drive from Letcher County to Wolfe County. Now, 90 minutes will nip it in the bud. I was brought up squirrel hunting. Things like deer, elk, turkey and bear were not heard of. I started carrying a 410-gauge single-shot Winchester model 37 when I was nine years old under the watchful eye of my dad. I am now almost 75 and have never had an accident. He taught me well.

In those days we had no mosquito spray (they just bit us) and no toilet paper (we used leaves. When paper towels came out, Dad said one sheet of those was better than a hundred leaves). We also had no camo clothing, just green pants, and shirt with an old army surplus cap on our heads.

My dad was some hunter and remained true to the sport he loved until his death in 1982. He taught me to be quiet, to pay attention, and to stay alert. “Now you see nothing,” he would say. “Turn your head sideways, look again, there are six squirrels cutting.”

One thing he taught me that is less true today than when he taught me is about keeping the animal in the game. I saw him take his boots off just to sneak another 10 yards to get the squirrels in the game. Now with long-range shooting and so-called hunters taking game at half a mile, I think it is now more about the harvest than the thrill of the sport.

Some of my friends and myself grew up with the love of squirrel hunting. I still go today. Please, if not for yourself, take some kid hunting on opening day. It will do both of you a world of good.