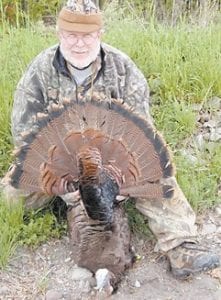 Thank goodness it is over. I am the only person I know who can turn a dream into a nightmare, fun into a chore, and of course victory into defeat. If anyone does a better job at making something fun into a headache, I don’t want to meet you.

My quest for a Grand Slam came to an end on the second morning (April 27) of West Virginia’s turkey season. As soon as the longbeard fell, at 7:20 a.m., I had a feeling of emptiness. Although this Slam happened fast, a total of 12 hunting days which took me to six diff erent states, it seemed like a lifetime.

I started this journey on March 13 and ended it 46 days later. After calling my friend Raymond Brown to tell him it was over, his first words were, “I knew you were going to do it.” I will admit I had my doubts. The first three went textbook perfect. It was the Eastern that was making me pull my hair out. I had plenty of birds gobbling at me in North Carolina and Kentucky, but I just couldn’t close the deal. With all the pressure behind me now, I will enjoy the rest of the season.

I still have two tags each for North Carolina and Kentucky, and one for West Virginia. Like the time I set my goal to kill eight turkeys in four states in one month, it wasn’t fun then nor is it fun now. I reached my goal in the spring of 2003, killing the eight turkeys, but never again. I may complete several other Slams, but I will never put myself under as much pressure as this year. It is not important to anybody but me if I get my Slam in 46 days or have to wait until the fall season to finish. A Slam is a Slam, and a good personal feeling knowing very few hunters had gotten one.

With the help of my readers, I am going after the Goulds turkey next year. I will attempt it first then I can enjoy the rest of the season. I will need to raise about threethousand dollars from ya’ll, think we can do it? I know we can.

One final thought: Please don’t try what I just did. It will make you old fast.