Fishing on the Ohio River a ‘real trip’ 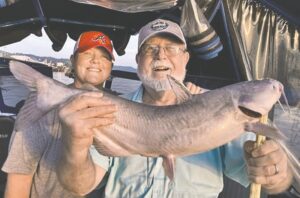 Steve Brewer and daughter Nema Brewer-Candy pose for a photo with one of the catfish they caught from the Ohio River.

First, let me say I am sorry to my buddy, Greg “Gabby” Caudill, that writes Gabby’s Fishing Fever. This Struttin’ Time is about a fishing trip that I took and invited our Struttin’ Time readers along, with my daughter, Nema Brewer-Candy, for her birthday. Gabby, please forgive me.

My journey goes on, one step at the time. Although still sick, I have found the strength to get out somewhat and keep my word.

This week, I had the pleasure of visiting my friend, Danny Click, at his farm. Our talks are valuable to me because he is a world of knowledge.

I told you last week there were two dates that I hoped to find the strength to follow through on what I had promised. I was hoping the “Great Physician” would touch me once more and have me well enough to take a Ohio River fishing trip to fish with my daughter for her birthday.

We were booked with Dale’s Guide Service of Cincinnati, Ohio. This guide service is owned and operated by Dale Broughton. He is one good guide and a great fellow. You can count on him. I would like to recommend Dale to you, if you ever want to fish the Ohio River.

It was one real trip. Either the fishing on the Ohio River is great, or Dale made it that way, or both. From the first couple of minutes Dale put the cut bait into the water, we were catching fish.

Nema and I arrived somewhat early, so we could eat a “birthday” lunch before heading out for a six-hour fishing trip. We stumbled upon a world-class restaurant right on the river; the name of this restaurant is Eli’s BBQ. Everything was just perfect. If you are in Cincinnati, stop by, you will love it.

I sent Dale a message and told him we were there. He answered right back, and said he would be there in a few. Sure enough, there he was. We departed the dock, and right away I knew he was my kind of guide.

After what seemed like a 30-minute boat ride down the river, he put down anchor, baited the hooks, and the action was on. The first fish Nema caught was a buffalo. I said, “Nema, you have caught a big carp.”

Dale was fast to correct me. Not a carp, not even in the same family. You probably call them suckers. They are native to us, the carp is an import. I am ashamed to say, I never heard of a buffalo. It took Nema about 10 minutes to land it. It weighed around 20 pounds.

At one time I noticed all seven poles had fish on them. Of course, we were fishing for catfish, and started landing them. Wow, we had set our goal at four nice catfish to take home for a fish fry, and we had those in less than an hour.

We had booked a six-hour fishing trip, and called it quits in less than four hours. I never kept count of the fish we caught, but we were worn out, so decided to head home.

If you are wanting to take a real fishing trip on the Ohio River, please give Dale a call at (513) 248-9032. You will make a memory that will last a lifetime.