An ‘incredible experience’ is told 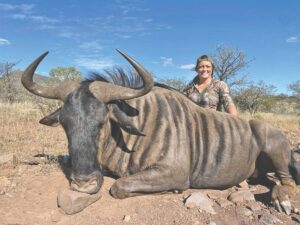 Bridgette Holbrook says the meat prepared from this Blue Wildebeest she killed in South Africa “is the best meat I have ever eaten.”

What a beautiful time of the season. Although my black bear hunt was delayed for a week, it has given me more time to heal from my recent surgery.

Now let’s get back to Bridgette Holbrook’s hunting story from South Africa. When we left last week, Bridgette and her professional hunter Russell had climbed to the top of a mountain, only to be left holding the bag when baboon’s ran off the Kudu the two were stalking.

“They never had a clue we were there. We were in a perfect setup. As he stood up, he just kept getting bigger and bigger. My heart was about to burst from my chest. I got set up and waited for those six words to come from Russell, ‘Okay, he is a good one.’ One of the many things I must give Russell credit for (is) he always made sure we took the right animal. A mature animal for sure, this one was a ‘Grand Poobah.’ He was so majestic! He must have known his journey here was coming to an end (as) he stood and gave me a perfect shot, which I took.

“But as with many animals he never wanted to go down. After the perfect 150-meter shot, he ran in circles, much like a bull fighting a red flagged matador in Madrid (which I have watched by the way). Luckily, he gave in, and to our amazement ran and fell right in the middle of a road.”

Bridgette continues, “The hide of this animal is incredible. The stripes are gorgeous and give off amazing color. The ‘blues’ by far have the prettiest hides, in my eyes. The mass of the horns are ginormous for lack of a better term. However, nothing compares to the taste of this animal. I have traveled the world over and been blessed to eat at some of the finest restaurants, family homes, and holes in the walls. This is the best meat I have ever eaten.

“I would make this trip again just so I could sup on the meat once again. I hope you have enjoyed my hunts and pictures I have shared with you. I want you to know this is absolutely one of my most incredible experiences of my entire life. Things like this happen when, like my friend Steve Brewer says, we think outside the box.”