Husband gets his nice buck, too 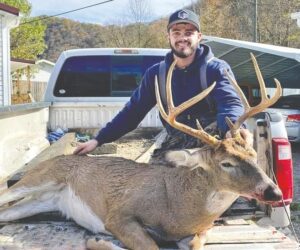 Nick Collins of McRoberts poses with an eight-point buck he killed just a day after his wife harvested a nine-pointer in archery season.

Although I believe women are helping save our beloved sport of hunting, and to a lesser degree, fishing, many men do still hunt. This is one such story, and it is about Nick Collins, the husband of McKaye Collins of McRoberts, whom we featured in Struttin’ Time last week.

After McKaye harvested a monster nine-point buck, Nick started thinking long and hard about how he might catch up. Nick, who started archery hunting at age 13, had to work until 6 a.m. the morning before McKaye’s hunt, so the next day he couldn’t get into his stand until around 7:30 a.m. In his own words, here is Nick telling about his hunt:

“This was only my second day of hunting this new area, but I could tell it would be a productive area from all the scrapes and rubs I found. …I only had my trail cams out a few days, but had not had the time to even look at the pictures. I had worked this area the day before, making myself some shooting lanes. I heard some grunts and movement just below me right after I had climbed into my stand, but nothing appeared.

“I am a trophy hunter and very selective of what I want to try and harvest. I consider the age, the antlers, and the condition of my prey. Around noon, an eightpoint buck caught the corner of my eye. Time to look him over, as he walked right under my tree stand. I could have dropped my phone on top of him (as) he was just walking through, checking the scrapes. As soon as he was about to walk out of my shooting range, I grunted, he stopped, and game over.

“I released my arrow the second he stopped, and I knew it was a perfect shot. He expired within eyesight. To say I was thrilled would be an understatement. I couldn’t wait to let McKaye know and was hoping she would help me get it out of the mountains.

“Remember, hunting is not killing, but when you do get your prey, the fun is over and the work starts.”