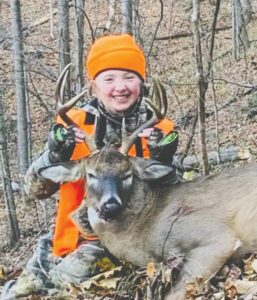 10-year-old Piper Jaylee Adams is particular about what type of deer she is willing to go after during hunting season. This eight-point buck met the standards she had set for herself.

I love doing these stories about our youth who love to hunt. Here is one about the daughter of my lifelong friend, Larry Adams. Her name is Piper Jaylee Adams. She is 10 years old and quite a hunter. And she loves to hunt.

Unlike many hunters, Piper has set standards for herself, and if a buck doesn’t meet those standards she lets it walk. She will not shoot a spike, nor a fork. She doesn’t want to kill any young deer. So, here’s a tip of my hat to you, Piper, for your way of thinking.

After hunting last year and letting several walk she got her chance on November 18 of this season while hunting on her papaw’s farm in the Eolia section of Letcher County.

Here is what Larry Adams had to say about that day:

“Piper’s deer came on the first hunt of the year for her. As her dad, I am quite proud that she has set her standards, without my help, and I am very proud of her for that.

“We sat down at 6:30 a.m. overlooking a hollow, but decided to move more to the head of the hollow shortly after daylight. Within 15 minutes in walked a nice eight-point. He never knew we were there and turned sideways for a perfect broadside shot.

“It was about 30 yards out, and it fit her description of what she wanted to harvest. She hammered it, and her excitement was budding over. After last year’s hardships, she has, at the ripe old age of 10, experienced the thrill of victory and the agony of defeat.”