Girl, 9, bests her brother and mother 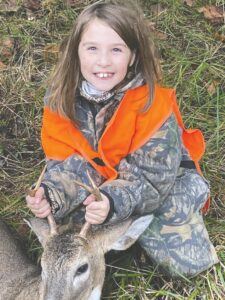 Nine-year-old Malarie Watts braved 30-degree weather and a long walk in the hills to harvest this nice buck. She is the daughter of Dennis and Jocelyn Watts.

I just love lifelong friendships, don’t you? I am not talking about these superficial Facebook types of friendship with people who would not know you if you were having a meal with them, but the kinds of friendships that you build over the years. The kind you have from working with people, holding their hands in times of grief, and breaking bread with them.

This Struttin’ Time column goes many years back with this family. I first met Martha Watts in 1972 at the old Fernoy’s Drive Inn on Thornton Hill. She was with my aunt, Jeanette Brewer Fields, while working for ARH Home Health. I worked with Martha for many years in the early 2000’s as she led the Letcher County Kids Days Committee. She did great things for the children.

Then there is my friend Laramine Adams, who spent many hours with me in the cool of the shade when I lived at Dry Fork. I would never dare to try and announce all my lifetime friends I have had or still have. Martha and Laramine have something in common — they share a granddaughter together.

Martha’s son, Dennis Watts, married Laramine’s daughter, Jocelyn. This Struttin’ Time is about that granddaughter, whose name is Malarie Watts. She is nine years old, and she loves to best her brother Dylan Watts in everything, including hunting for sure. We did a hunting story on Dylan a few years back. Now it is Malarie’s turn.

Malarie had only been in her blind for an hour when the buck walked out. Her daddy looked through the scope, saw that it was a good one she would love to take, and told her it is 90 yards, a distance she had never shot before. (By the way, I can’t even see that far now).

The first shot hammered the big buck, and he ran off. Malarie decided to warm some bologna over the tent heater. Her mother guessed the excitement had given her an adrenaline rush and made her hungry. After she fixed and ate her bologna sandwich, she and her dad went off to find her deer. They found it a few yards from where she had shot it. Her excited first words were, “My first deer was a buck, and Buddy’s was only a doe.”

She then looked at Jocelyn and informed her that her buck was even bigger than the one her mother had harvested. Nothing could have made her mother happier.

All was right in the world for this little sister. Now we need to think about what she endured to get that buck. It took them quite a while to get to their hunting spot in 30-degree weather, but she braved it all. Malarie weighs in at a whopping 60 pounds, but she is tougher than nails.

This is the end of Struttin’ Time for 2021. I want to think you Struttin’ Time readers, the people at The Mountain Eagle, and most of all my Master who guides me each day. We’ll see you again on January 4. Until then, God bless, merry Christmas, and happy New Year.