Looking for fun throughout 2022 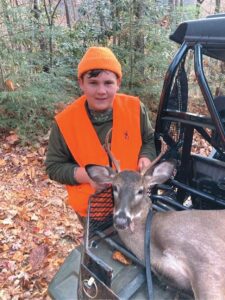 Another new year, another trip around the sun. I am looking at 2022 as a way forward; I refuse to look into my rearview. If we can produce just a little more love, kindness, and forgiveness, I think it will go a long way.

Already some good news, mixed with bad news for 2022. First let us do the good news. We never finished all the hunting stories from last year, most of them about our youth. Well, I am cleaning the plate of last year’s stories, starting now. More good news: I have already booked and paid for my Western state hunts in Kansas and Nebraska.

Now for a little bad news. Sharon, my wife, has already put the smackdown on my planned hunt in Mexico to get a “World Slam.” I had booked my 11-hour flight, really knowing the miles and years had worn thin on this old writer and hunter’s body. I waited too late in life to try and fill a dream of getting all six sub-species of turkey. I won’t get a World Slam, but I can live with having a Royal Slam, which is five of the six wild turkeys.

As you Struttin’ Time readers know, I love writing hunting and fishing stories about women and children. Whether everyone realizes it or not, they have stepped up and saved our passion of hunting.

The following story comes from my brother who lives in North Carolina and is an avid hunter. Together he and I have logged more than 140 years of hunting. We hoped to pass that passion on to our children and grandchildren, but that never happened. I have two daughters. One, Nema, hunts and fishes with me some, Angie never. We only have one grandchild, and she is an “anti.” Oh well.

Rick had one boy and one girl, so neither of us really had a chance to teach our skills to our children. Rick’s son, Ricky Allen, loves to hunt. Ricky Allen’s one son also loves hunting. Rick’s daughter has five children, but only one hunts. This story is about him.

His name is Rylan Martin. He is 13 years old, attends West Wilkes Middle School, and loves to hunt with Rick, his grandpa. Although Rylan has hunted with his grandpa for three years, this is his first harvest. He has big dreams of being a world class hunter like his grandpa. Tip of my hat to you Rylan for a job well done. I hope you expand on your hunting skills with each hunt. And remember, you will never kill anything but time lying on your couch. Good luck to you following your grandpa’s footsteps into the world of hunting.

Happy New Year to everyone. Let’s spend 2022 having fun with Struttin’ Time, where you can take a trip and never leave the farm.