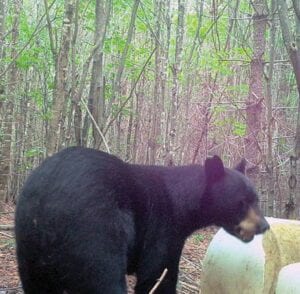 This photo of a 467-pound black bear was captured on a trail camera in Maine before it was killed by a hunter a few days later.

As anyone who knows me can tell you, I have always loved to hunt and fish. I have hunted rams with the Nes Perce of Idaho and stayed with them for a while to learn their customs, their beliefs, and everything else I could about them.

I have hunted and stayed with the Sioux on their land in Gilbert, South Dakota.That group is known as the Rose Buds.

I have hunted New Mexico, in the Carson National Forest, with the Apache for elk.

My favorite hunt is with Pine Grove Guide Service in Jackman, Maine, hunting black bear with Frank and Cathie Lawler. I have hunted almost every year with them since 2005. I have never failed to kill a bear, 11 total. I was unable to hunt with them this year because of the virus, but I plan on returning next year if the good Lord keeps His hand of mercy on me.

Harper, formally of Estill County, and a very close friend. We had a blast. If any of my hunting buddies would like a really nice black bear hunt for less than $1,000, Frank and Cathie are in my book the ones to hunt with. Keep in mind that Maine is 1,800 miles from us. Frank and Cathie provide only a place to hunt; the other things are extra — the license, the room, the food, and getting there and back.

The first year I met the Lawlers they told me, “Steve, as long as we have this 100,000 acres leased you will always have a place to hunt.” I have never heard a dog, a truck, nor have I ever seen another hunter there. I guess having 100,000 acres has its advantages.

I want you to see what a bear one of his clients got this week, 467 pounds. Wow.The average is around 275, so you can get a picture of the bears Frank has on his lease. If you feel like a real black bear hunt come next season, let me know and I can hook you up.

Till next week, stay safe.