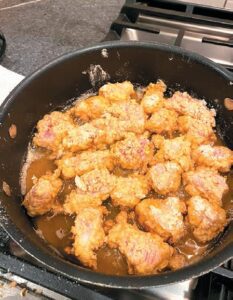 Alligator meat harvested by members of Wildlife Women was fried into tasty bites.

As you know, I love doing stories that I get from people who think outside the box. I got a couple of e-mails this week from readers who said they are going after their “Grand Slam” for wild turkeys in 2022 just because we are always talking about hunters who, well, think outside the box.

This week I choose to do another story about a group of women hunters, Wildlife Women, who are always on the move, finding new adventure.

This week, the ladies of Wildlife Women told me about their “gator” hunt to Louisiana. Bridgette Holbrook, the group’s president, told me that hunting for alligators had been on her “bucket list” for a long time. Bridgette said she had talked often to her friend Michelle about hunting alligators, but said her response was, “I won’t be hunting gators, but if I do it will be with you.”

“We have spent many hours in a blind, or tree stand together, but watching her kill her first animal — and it would be a gator — was more exciting than anything,” Bridgette said. “Then to go on and fill some of my bucket list next truly topped my expectations of this hunt. We had gone out and baited for the gators. It was just like you think — the worst smelling chicken ever. Then to pull up a ginormous hook with some still left on, was even worse than the putting on the chicken. But we did it; we waited the entire experience.

“Michelle and Tina had already pulled their gators in; now it was my turn. Unfortunately, there wasn’t a gator on my hook, but we spotted one about a hundred yards out with its head out of the water, of course. I hear, ‘Hey go shoot it’ as I am handed my AR. I had to ask, ‘Is that legal? I have never seen it done like this before.’ ‘Yes, ma’am it is.’

I was shaking already and thinking, how am I going to do this from a rocking boat. The window was short, so I gave it a try. They told me to lie flat and anchor the gun on the front of the boat. I tried a few shots but missed. The boat was just going up and down too much for a good shot. Then the gator disappears. I thought my chance just slipped away.

“Then I heard someone yell, ‘He is behind you. I was like, so now he is coming after us? It was like the show, and at that point it would have gone to commercial. I asked for the gun again but told them I would do better standing up. Gator head in my scope, 223 on my shoulder, boat still jumping up and down, I took a deep breath and pulled the trigger. I missed. I took another rapid shot and hit him right between the eyes. I could not believe what had just happened. I was in shock. I was guessing him to be about 50 yards away, and he started sinking really fast.

“Our other boat got there first and pulled in my prize for me. I was on cloud nine, but little did I know just how much a story my gator would have. He was just short of eight feet, and would provide me with checking my bucket list, food fare for my table, making great bookends, a necklace, earrings and boots on my feet.”

Stay with us for the final chapter of Wildlife Women’s gator hunt next week.