STUCK IN PLACE — Play was stopped during the Letcher County Central boys’ matchup against visiting Knott Central last week after an errant shot stuck on the rim. Play was stopped and the ball was knocked off the rim. The ruling by the game’s officials was a “jump ball.” The Cougars lost, 72-52. (Photo by Chris Anderson) 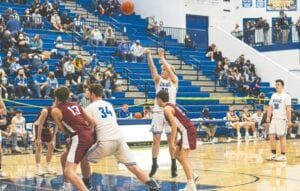 Nine-year-old Christopher Anderson Jr. captured this photograph of Letcher Central junior JD McDannel shooting a free throw during the Cougars’ February 25 game with Knott Central. Also pictured for Letcher Central are Cooper Bailey (34) and Max Roark (30). The Cougars bounced back from the 72-52 loss to the Patriots with an 88- 53 win over homestanding Powell County on February 26. LCC’s won-loss record stood at 8-8 going into Tuesday night’s game at Leslie County. Christopher Jr. is the son of Mountain Eagle contributor Chris Anderson.