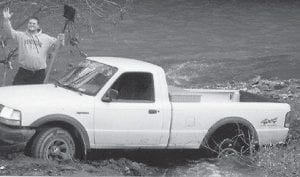 As Matt Gilley was taking his seven-year-old daughter, Katelyn, to a fishing spot recently, his truck became stuck at Mill Branch at Roxana. Katelyn escaped by climbing out of the truck window as her father attempted to dig out the truck with a shovel. He and his wife, Melaney, also have a son, Tyler, 6 months.