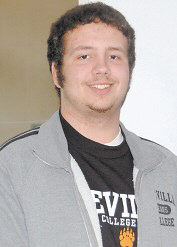 A Letcher County Central High School senior will be in the audience next week to watch Senator Barack Obama’s historic inauguration as the 44th president of the United States.

Jimmy Craft, 18, has been chosen to participate in the Presidential Youth Inaugural Conference (PYIC). The conference says its mission is to provide students with a deeper understanding of the history behind the electoral process and the rich tradition surrounding the presidential inauguration.

“It’s amazing,” said Craft. ” I can’t believe I was one of the ones chosen. It is such an honor to be chosen.”

As part of a five-day program, Craft will attend roundtable discussions with national journalists, meetings with congressional staff, and debates with political experts.

“The Presidential Youth Inaugural Conference will provide students with an opportunity to take part in historic events that coincide with the inauguration of the President of the United States,” said Marguerite Regan, dean of Academic Affairs for the Congressional Youth Leadership Council (CYCL), the organization that sponsors PYIC.

After watching Obama take the oath of office, Craft will view the inaugural parade as the president, vice president and their families make their way down Pennsylvania Avenue from the Capitol Building to the White House.

He will also attend an inaugural ball.

In addition to participating in inaugural events and festivities, Craft and others in his group will visit numerous sites and monuments in the nation’s capital. The students will also have private access to the Smithsonian Institution on the National Mall.

“The reason I want to go to this forum is because I like to study politics, watch debates, and to actually be there for this certain inauguration is just out of this world,” said Craft.

Local businesses and individuals donated a total of $2,400 to help pay for Craft’s travel and lodging.

“I’m very proud of him,” said Della Craft. “It is an honor for someone from Letcher County to be nominated for this.”

Craft was nominated to participate in the Presidential Youth Inaugural Conference because he is an alumnus of the National Youth Leadership Forum on Medicine, which he attended last summer in Philadelphia.

When Craft returns from the conference he is going to write about his experience in an article for LCCHS’s school newspaper,

“I’m just really excited to see an historical event like this,” said Craft.