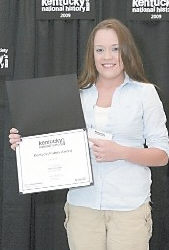 Seventeen schools and nearly 200 students participated in the state contest in hopes of advancing to the national contest, which will be held June 14-18 at the University of Maryland.

Boyd received first place in the senior division individual exhibit competition for her project, “Ben Buster Taylor.” She was also honored with the Kentucky History Award and a $200 prize by the Kentucky Historical Society for her project featuring the late Taylor, who became Letcher County’s sheriff after retiring as a sergent in the United State Army Special Forces, also known as Green Berets.

The NHD program is an annual, year-long program designed to promote the teaching and learning of history in America’s schools. Students analyze the historical significance of their topics and present conclusions in dramatic performances, imaginative exhibits, multimedia documentaries, Web sites, and research papers to audiences throughout the country.

In Kentucky, the program is coordinated by the Kentucky Historical Society.