Student is chosen for Duke program 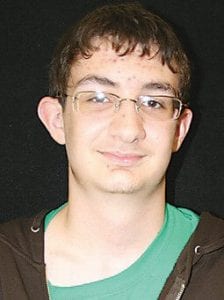 Noah Hughes, a seventh-grade student at Victory Road Christian Academy in Cumberland, has placed academically in the top tier in the nation in one of the country’s premier talent search programs.

As part of the program, Noah took the American College Test (ACT) and ranked among the top five percent nationally of students in his age group.

On the basis of his score, Noah qualified to attend Duke TIP’s Center for Summer Studies, which is designed to motivate and challenge academically gifted students. A broad spectrum of courses, from architecture to cryptography to zoological studies, is offered.

“We are very proud of Noah and his accomplishments,” said Debbie Sherman, Victory Road principal.

Noah’s hobbies include NASCAR and basketball. He and his brother, Ethan, have also won local and regional awards in the Kentucky Storytelling Association’s youth program.

Noah is the son of Carlton and Kathy Hughes of Cumberland. His grandparents are Glenda Sue and Cecil Wayne Hughes of Jenkins and Norma Dixon of Dione and the late Myrthul Dixon.