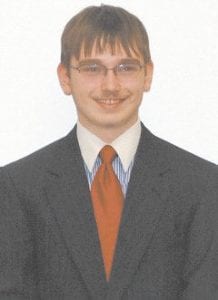 This is the first year Letcher County schools have participated in the Speech League. Sexton will again recite Obama’s election night speech in the competition that begins on March 13.

Sexton competed in oratorical declamation, which is the recitation of a speech that has been delivered in public. He had to edit the speech to fit the time limit of six to nine minutes.

Sexton decided to use Obama’s victory speech in competition after seeing it delivered on television. He said he liked the speech because it showed that “Obama didn’t forget the little people, the small donations, the varied sections of the country, nor did he fail to mention his family who sacrificed so much while he was campaigning.”

Sexton said he has always had a love of politics and historical figures. His mother, Debi Sexton, said that when Tre’ was three years old he began introducing himself by saying, “Hello. I’m Tre’ Sexton and I’m going to be the President of the United States.”

“I’m just thrilled and delighted that the very first year we have speech the students and the program have succeeded,” said Anna Craft, superintendent of the Letcher County School System.

Craft said the Letcher County Board of Education established the position of speech coach at each school in the district. She said the speech program is important because it builds up the confidence of students who can often be shy and enables them to succeed in other academic areas.

The junior state tournament is set for March 20 and March 21, also at Western Kentucky University.