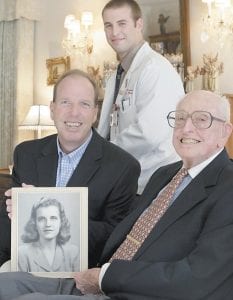 Jim Purcell holds a photo of his late wife of 64 years, Dorothy “Dot” Purcell, in his living room accompanied by his his son Mike Purcell, left, and Indiana University Northwest firstyear medical student Lucas Buchler. Dot Purcell wanted her body to go to science and she ended up at Buchler’s school, which has an unusual program where medical students often meet the families of the donors they dissect in gross anatomy. Though reluctant at first, some of Purcell’s family members, including her husband, ended up meeting Buchler and developing a friendship with him and a few other students. (AP Photo/M. Spencer Green)

Dot Purcell always knew she would donate her body to science. Even when young, the mother of 11, a doctor’s daughter, would say, “there’s something good in here” that might help others.

That death talk made her doting husband squeamish, and Jim Purcell tried to talk her out of it, saying, as they aged, that her body would be too old to be useful. He didn’t want to contemplate losing his beautiful, fun-loving wife, who cherished life but accepted death. But when the moment came, after 64 blissful years of marriage, and her wish was carried out, neither of them could have imagined just how much Dot’s decision would help, and heal.

Every year, thousands of people donate their bodies to science, becoming an essential part of hands-on medical training. Their gift allows students to study human anatomy and the effects of age, trauma and illness in close-up detail.

Yet, despite this intimacy, usual protocol calls for some distance. Donors are anonymous, and while many U.S. schools hold memorial services to honor them, details of what goes on in the dissection lab just aren’t talked about much, certainly not with the surviving family members. It’s all too awkward, too indelicate, too personal.

Which is why the story of what happens at Indiana University Northwest, where Dot Purcell’s body ended up, is so unusual.

At the tiny medical school, a vibrant oasis in Gary, an otherwise decaying steel town, medical students are told the donors’ names, given their medical records, and encouraged to get to know their families. These cadavers are the students’ first patients, with lives worth knowing, not just for humanistic reasons, but to help students better understand the bodies they dissect.

Ernest Talarico, assistant director of medical education at IU Northwest, is the brains behind the idea. When he was in school, students often gave the unidentified cadavers crude nicknames. “Salty” was the moniker given a cadaver whom Talarico helped dissect — because the man had a nude woman tattoo on his chest.

“I found that disrespectful because they had a name and a life, and we should respect that as part of the tremendous gift they give to us,” Talarico said.

So last October, a year after Dot’s death, Purcell got a letter from Talarico. Dot’s body, donated to the state anatomical gift association, had been sent to the Gary school, just 10 miles from the family’s home in Munster, and they were invited to meet with the four first-year medical students who would be working on her.

“I was not that eager to meet them,” Purcell said. At 90, the retired public relations executive is still grieving for the woman who ran their busy household and made him feel whole.

Dot had been mostly healthy until she was diagnosed in early 2008 with an extremely rare type of melanoma, the most dangerous form of skin cancer.

“It was devastating to me and to everyone in the family,” Purcell said with a deep, heavy sigh, “because it just came on suddenly, and then she was gone.”

Dot’s diagnosis came several months before she died, but after six decades together, months seem like days and life without Dot was unimaginable to Jim.

More receptive to the idea of meeting the students was his son, Mike, ninth out of the 11 kids and more like Dot — an outgoing, glass-half-full kind of guy. He gently tried to convince his dad that it might be a good idea.

“The more my dad and I thought about it, we were like, you know what, she’s come home. This is great,” said Mike Purcell, 46.

First-year medical student Lucas Buchler had his own trepidations about meeting Dot’s family. He thought the dynamics of the whole thing were pretty weird. Here were students on an amazing high, starting medical school — for some, fulfilling a lifelong goal — and they’d be meeting with families “in grieving mode,” reeling from the loss of a loved one.

“It’s a fairly emotional experience,” Buchler, 23, said during a recent interview, a few weeks before starting his second year.

For many students, it’s the first time they’d ever seen a cadaver, and even medical students get squeamish. But also, they can be overcome by appreciation for the donors and “their ultimate gift.”

“We all prepared ourselves for an awkward interaction,” Buchler said.

When the day arrived, there were more than just polite handshakes. The businessman in Jim Purcell approached it like interviewing a job candidate, and he grilled the students.

“I asked them what brought them into medicine,” Jim Purcell said.

For Buchler, a handsome, serious young man with a thick brown buzz cut and an almost Marine-like bearing, it was an intense interest in the human body and how it works, plus a genuine desire to help people, that made him want to be a doctor.

“I could tell by how he listened to our answers he had a genuine interest,” Buchler said. “It was wonderful for us.”

Throughout the semester, while working in the dissection lab, the students kept in touch with the Purcells, gaining an understanding of the family’s deep grief while getting to know who Dot was.

She was an uncommon mix of elegant and practical, a buoyant blonde who met Jim while they were in college — he at Notre Dame, she at its sister school, St. Mary’s College. Dorothy — everyone called her Dot — was a former teacher who loved sparkly jewelry and never left the house without her makeup just so, but wore gym shoes with everything because of chronic foot pain.

She helped design the spacious two-story house she and Jim built 50 years ago, with fancy French provincial decor and washer and dryer on the main floor instead of the basement, decades before that became fashionable, to make them more accessible.

She loved books and music, going out on the town with her husband and ice-skating with her kids. She had a great sense of humor, and taught her children to challenge everything.

Coincidentally, the music Dot’s student team chose to listen to during dissections was the same kind of classical music she loved.

“We knew right away that they clicked with my mom,” Mike Purcell said.

Buchler, especially, clicked with the Purcells. Since that first meeting, and even after the semester ended, he’s been in weekly contact, by e-mail, phone, or personal visits, with Jim and Mike, who also lives nearby. First, it was to fill them in on what he was learning in class, now it’s to keep them updated on research he’s doing.

Buchler says learning about Dot the person has helped what he’s learned in the lab make more sense.

Along with melanoma, Dot had a blood condition related to leukemia, and doctors had told the family that it was the cause of death. But Buchler and his team learned the melanoma, which had spread to her liver, was the true cause. It’s a type of cancer that invades mucous membranes rather than other skin surfaces. There are fewer than 300 reported cases worldwide, and Buchler said research on Dot will improve understanding of risk factors for this rare cancer.

The students also discovered that Dot had a bone abnormality called Charcot foot, which explains why her feet were always so painful and swollen. Although she didn’t have diabetes, the foot condition is common in that disease, and Buchler says the knowledge he’s gained from Dot will help him treat future patients with diabetes.

Late in life, Dot developed unusually hard patches of skin on her calves. She never got a diagnosis. Studying tissue samples under the microscope, Buchler’s team found bone tissue had developed deep inside the skin — another extremely rare condition that he will describe in a research paper.

All families involved in the program have questions. Most want general information about what killed their loved one, minus graphic details. Students give them updates, explaining that they’re now working on the musculoskeletal system, for example, without getting too descriptive.

If families’ queries veer into graphic territory, students steer them back “so that things aren’t uncomfortable for them or us,” Buchler said. “We’d say those are details we’d rather not discuss, for reasons you understand.”

The Purcells just wanted to know what the students were learning and tried not to think about what goes on in dissections.

That became a challenge, though, at the end of the semester, when students hold a memorial service for the donors — in the anatomy lab, with the bodies present and loved ones invited to attend. The cold steel dissection tables where the bodies lie all semester are covered with metal hoods, draped tastefully with cloth and topped with flower bouquets, candles and donors’ photos. But still.

“When I first saw that it was going to be in there,” Mike Purcell says, “I had no desire to go in there.”

Jim Purcell was particularly hesitant. “All he thought about was all the chopping and cutting,” Mike Purcell says.

But the Purcells are glad they attended. They are Roman Catholic but never had a wake or funeral — donated bodies must be whisked away right after death to be properly preserved. The ceremony in that dissection room helped move them closer to closure.

The students read letters of appreciation to the six donors present. And a member of the clergy spoke of God and the afterlife.

Like most donor bodies, Dot’s was cremated at semester’s end, her remains mailed back to her family in an unmarked square box. Jim Purcell placed the box, still wrapped in postal paper, in a cabinet in the family living room, on a shelf in between two statues of angels.

The box is unopened, Mike says, reflecting his father’s wishes. “He doesn’t want to think of her as being reduced to that.”