Students learn to be lawmakers 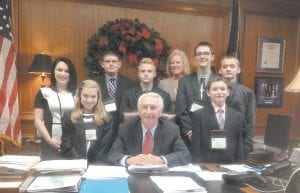 Instead of reading about how a bill becomes a law, seven middle school students from Arlie Boggs Elementary School learned firsthand by writing their own mock bills and presenting them at the Capitol building in Frankfort.

“When they were talking so wonderfully about the new delegation and they talked about how hard it was to come up with the best new delegation award and then when they called our kids’ names, I was super proud,” said Myrtle Boggs, an Arlie Boggs teacher and Kentucky Youth Association advisor.

Of the 40 legislative bills pertaining to current Kentucky issues presented during the conference, the bill written by Arlie Boggs students Ronnie Adams, Aly Foley, Jesse Mullins and Israel Terry was one of the few bills from the assembly signed into law. 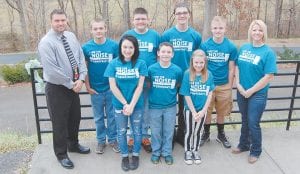 Aly Foley received an outstanding delegate award and Ronnie Adams was named outstanding speaker. The two advocated for Senate Bill 1, which would require all Kentucky school systems to have a guidance counselor in every school by the 2018-19 school year. Israel Terry and Jesse Mullins conducted research to defend the bill.

“A lot of people are dealing with home problems and school issues and don’t have anyone to talk to,” said Foley.

The bill ties in with bullying, peer pressure and parental abuse.

The students began preparing for the three-day event near the beginning of the school year. After presenting the bill at the Hyatt Regency in Lexington on Dec. 1, the group was told that it would travel to Frankfort on Dec. 2 to present the bill at the Capitol in front of 250 students.

On the first night of the event, the Arlie Boggs students conducted additional research and tweaked their strategy from 11:30 p.m. until 1 a.m. at the hotel.

“Our beginning speeches were surprisingly short and rambled,” said Ronnie Adams. “We didn’t have an ending speech yet so we had to write those out. Without those two you can’t really get the point across for your bill.”

After a late night, the group got up at 6 a.m. to get ready for the second day of the convention.

“The first night they were all very skittish,” said Mrs. Boggs. “The second day they blossomed. They stood with different confi- dence. And I really think that is why they did better on the second day is because they saw the examples of how the other kids were doing and then they jumped right in and gave it 100 percent.”

Students participated in the assembly in other ways than writing bills.

“The neat thing was that we could speak for or against other people’s bills,” said Adams. “You could actually either help out the bill you want to pass or if it’s not a good enough bill you could speak against it. At the end we all vote.”

Some students focused on research, while others were members of the media. Some were lobbyists.

Students also spoke to Gov. Steve Beshear in his office for about 15 minutes on Dec. 2.

“We met the governor and he smelled official,” said Seth Terry. “I can’t explain it. He smelled fancy.”

Beshear congratulated the students on their achievements.

“He said there’s a lot of good things to be said about small schools,” said Mrs. Boggs.

“You could tell he was working hard because papers were scattered on his desk,” he said.

Hannah Boggs will most likely always remember what Beshear said to her.

Mrs. Boggs said the seminar was the most educational and fun trip that she has attended in her 14 years as an educator.

“I would recommend this to any middle school student that has interest in any form of interest in social studies,” said Ronnie Adams. “It gives you a whole new opportunity to meet new friends and voice your opinions.”

Event fees were $230 per student, which were funded by donations from Whitesburg businesses and attorneys.

This spring the students plan to attend the Kentucky United Nations Assembly in Louisville. They will choose a country and topic relative to that area to research.