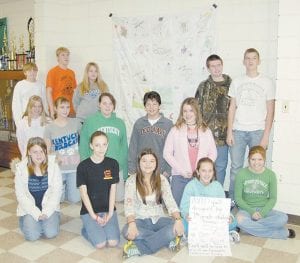 A soldier from Letcher County who is stationed in Iraq will receive a holiday surprise in the mail from a class at Whitesburg Middle School.

The AVID (Advancement Via Individual Determination) class turned brightly-colored drawings and encouraging words into a block quilt that will soon be mailed to Michael Andrew Adams in Baghdad.

The 23-year-old soldier from Fleming is expecting a package from WMS but does not know what it will contain.

“He was really touched that the kids at WMS would make something for a soldier. I thought that was just really sweet and he did, too,” said Kathy Adams, Michael Adams’s mother who is a guidance counselor at Letcher County Central High School.

Michael Adams, who attended Martha Jane Potter Elementary School and Fleming- Neon High School, started his 15-month tour of duty in Iraq this October. He and his wife, Heather, are expecting a baby girl in March.

Kathy Adams said her son went to college for two and a half years and then decided to go into the Army “because he thought it was the right thing to do to serve his country.”

Kathy Adams said the quilt is a broader reflection of the students’ awareness of the soldiers that are overseas.

“It means a lot to me that people are thinking of my son and other soldiers. It is incredibly touching. It is amazing that they are looking beyond themselves to express their appreciation,” said Kathy Adams.

Michael Adams’s father, Philip Adams, said he is taken aback by the thoughtfulness of the AVID class.

“I’ve said it many times. I wouldn’t want to live anywhere else but Letcher County. The people here are very thoughtful and caring. They take care of each other,” said Philip Adams, who works at Kentucky Farm Bureau. “These soldiers are making a difference in people’s lives in Iraq.”

Juanita Spangler, who teaches the AVID class, said part of the quilt project is to show compassion for others.

“They decided to show their appreciation to a soldier, to say thank you and to bring a little bit of hometown Christmas to the Middle East from eastern Kentucky,” said Spangler.

Katie Quillen said she and her classmates made the quilt for Michael Adams to try to make him feel more at home and to make his Christmas brighter.

“We made the quilt to show support for our troops and to show them we care for them,” said Morgan Sturgill, a seventhgrade student.

Kathy Adams said it takes about 10 days for her son to receive letters and gifts that his family send him through the mail, but she said it will take longer the closer it gets to Christmas.